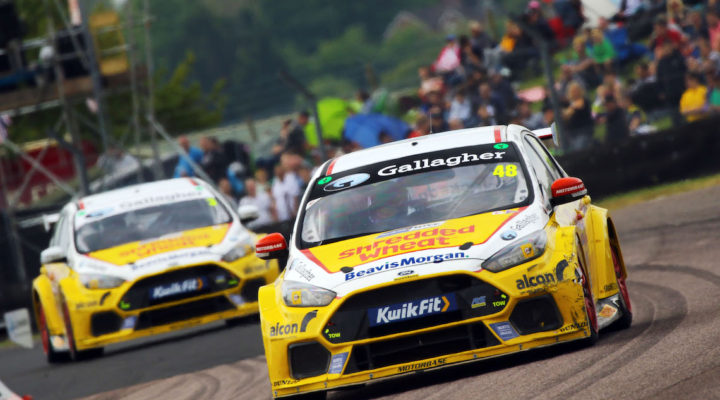 Team Shredded Wheat Racing with Gallagher endured a tough weekend back at Thruxton but battled back into the points after a derailed start to the weekend.

The team’s hopes of a strong result in qualifying were thwarted in the final moments of the session, when contact with Trade Price Cars Racing’s Mark Blundell forced Tom Chilton into the barriers at the final chicane with just over four minutes of the session remaining on the clock. The #3 Focus sustained heavy damage, requiring an overnight rebuild.

Race 1 saw Chilton make steady progress from 22nd to eventually cross the line in 18th. Ollie Jackson fared better in the sister Focus, making up three places to take 16th at the flag – just outside of the points-scoring zone.

Chilton battled hard over the 16-lap second encounter to eventually take P13 at the chequered flag. His weekend took another hit, though, as track limits infringements caught up with him and saw him demoted to 25th on the grid for the finale.

Jackson’s forward momentum continued into Race 2 until, inside the points-paying positions, contact with Chris Smiley’s Honda caused a puncture and put paid to chances.

The final race of the day finally delivered some reward for the team’s persistent efforts. The Motorbase duo made up considerable ground from the back of the grid before the safety car was called into action.

Both drivers continued their run, with Chilton ultimately breaking into the points to finish 13th, and Jackson in 16th as the final flag fell. Pace there to see, then, frustratingly, minus a chunk of luck over the weekend.

“We improved the car for each of the races and both drivers were looking good for a much better Race 2 result which can salvage a weekend like this, with a reverse grid, but it wasn’t to be,” said Team Manager Oly Collins.

“It was a nice to end a tough weekend with a much faster car than we started with, and to have scored some points,” added Chilton. “For me personally, Race 3 was a high as I went from the back of the grid to 13th.”

“We’ve learnt a lot about the car and the hard tyre and that’s the positive to take forwards,” said Jackson. “I’ve found I need to push on myself as well and we just need to find the magic that we’re missing on the hard tyre at the moment.”