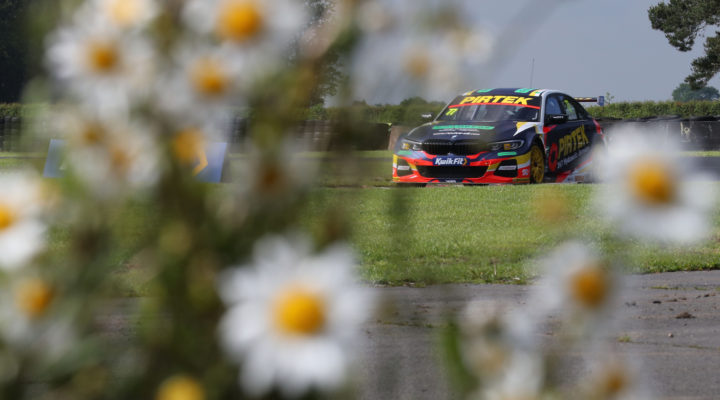 BMW Pirtek Racing’s Andrew Jordan is looking to continue his recent form with another strong showing at Croft this weekend, and the 30-year-old has kicked things off in the best way possible.

Jordan won twice last time out at Thruxton to reignite his championship challenge, and now the BMW 3 Series driver has set the quickest time in Free Practice 1 at Croft.

Croft Circuit has undergone a much publicised resurfacing in recent months and the freshly laid 2.13-miles of Tarmac proved to be in sparkling condition as Britain’s premier motor sport series took to the track for the first time. The highly anticipated increase in speeds came to fruition with all competing cars setting a time quicker than the current race lap record.

True to Croft form, however, the opening practice session was initially dominated by the BMWs of Jordan and Colin Turkington, as well as the Adrian Flux Subaru Racing car of Ash Sutton. With the circuit historically suiting rear-wheel drive machinary it was little surprise to see the trio leading the way, but the AmD-run Honda Civics of Sam Tordoff and Rory Butcher were also keen to join the party.

With a late flurry of changes at the top of the timesheets – including Jordan’s pace-setting lap on his penultimate tour – both Sutton and Tordoff would set exactly the same lap time to end up second and third respectively.

Turkington settled for fourth ahead of his Team BMW team-mate Tom Oliphant – all three 3 Series’ ominously inside the top five – whilst Butcher ended up sixth overall.

Matt Neal was best of the rest in the Halfords Yuasa Racing Honda, with his team-mate Dan Cammish also setting a top ten time. BTC Racing’s Chris Smiley and Team Toyota GB with Ginsters’ Tom Ingram were wedged between the manufacturer-backed Hondas when the chequered flag fell.

Free Practice 2 for the Kwik Fit British Touring Car Championship at Croft takes place at 12:00 before qualifying commences at 15:05, the latter being streamed live and exclusively via www.itv.com/btcc.