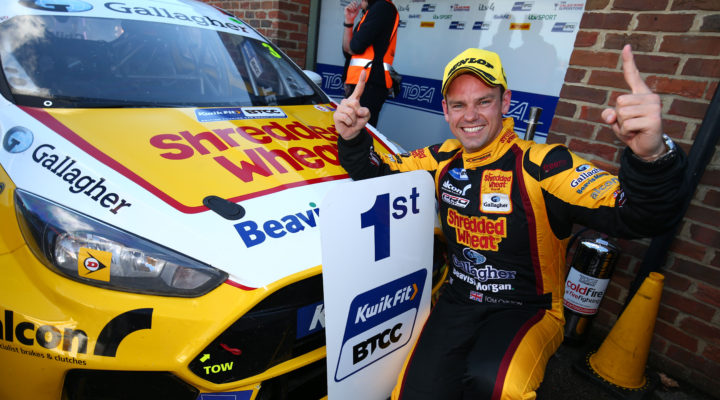 Chilton – starting from pole position in damp conditions – had to defend for almost the entire race from Josh Cook and Jason Plato, but the multiple race winner did so in style to take an important win that ignites his championship challenge.

“When you get a good start and you’re at the front you can almost take control of the lead,” said Chilton. “I said to my dad I’d try and get him a podium for Father’s Day and he said that wouldn’t be good enough, he wanted a win! I had to make sure I managed my tyres well and the team have made about a thousand setup changes over the weekend. It’s been a great one – a double podium and a race win.”
Cook and Plato also held station for the 17 lap duration but several attempts were made to get past by the BTCC’s most successful driver. The result represented a return to the podium for Plato – his first of 2019 – as the two time champion continues his impressive campaign so far.
“I needed that,” claimed Cook. “It’s been a tough weekend. We had a couple of issues in practice, qualifying was hit and miss and as soon as it started raining I knew that’d be a little bit of a leveller. Both Chilton and Plato drove impeccably. I couldn’t catch Tom to do anything about his lead and as soon as I got close, Jason was over my shoulder.
“A championship’s not won on your good weekends, it’s lost on your bad ones. I’d consider this a bad one but we’ve come out of it pretty well.”
“We’re quietly chipping away at it,” commented Plato. “From the first race at Brands we’ve known we’ve got the wet pace we just haven’t got it nailed in the dry. We’re making progress and getting nearer the front. I don’t think it’ll be too long before we see that Sterling Insurance Vauxhall Astra put me on the top step of the podium.”

One potential podium chaser paid the price of a pre-race gamble as Tom Ingram opted for the Dunlop Sport Maxx dry tyre despite heavy rainfall around 30 minutes before the race. It was an exciting watch of cat-and-mouse as Ingram’s Toyota Corolla eventually had the speed to outpace the leaders, but it all came too late in proceedings for last year’s runner-up to make any significant inroads.

Adrian Flux Subaru Racing’s Ash Sutton made a late eye-catching pass by Matt Neal’s Honda at the final hairpin to snatch fourth, with the latter having to settle for fifth at the finish.

Sixth looked to be going the way of today’s double race winner Andrew Jordan, but BMW stablemate Colin Turkington had other ideas. A race long battle, which also included the AmD-run Honda of Rory Butcher, built to an exciting climax in the closing stages. Turkington eyed his opportunity on the way out of Tower Bend and secured the move through the Jim Clark Esses, also bringing Butcher past Jordan in the process.