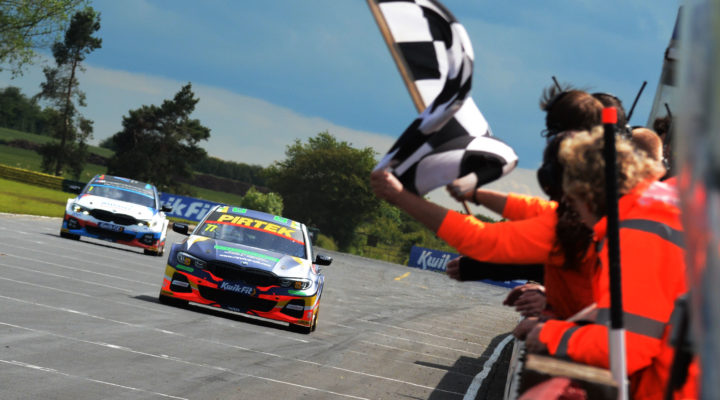 The ultra competitive BTCC field faced mixed conditions throughout the day in North Yorkshire as Dunlop’s Sport Maxx dry and BluResponse wet tyres played their part during an exciting afternoon of action.

Reigning champion Turkington eventually made it by Smiley and reeled in Jordan’s sister 3 Series in the closing stages, but it wasn’t enough to prevent his stablemate from yet another standout success.

Team Shredded Wheat Racing with Gallagher’s Chilton – starting from pole position in damp conditions – had to defend for almost the entire race from BTC Racing’s Cook and Plato, but the multiple race winner did so in style to take an important win that ignites his championship challenge.

A fourth, second and sixth places for Turkington sent him into the outright lead of the Drivers’ standings, as the reigning champion holds an 11 point advantage over Cook, with Sutton a further two points in arrears.

Cook and his BTC Racing squad are at the summit of both Independents’ standings, whilst Rory Butcher maintains top spot in the Jack Sears Trophy.

Rounds 13, 14 and 15 of the 2019 Kwik Fit British Touring Car Championship will take place at Oulton Park in two weeks’ time.

Andrew Jordan said: “A second double of the year… West Surrey Racing and BMW; they’re the boys and girls. I couldn’t have asked for more today. It was pretty much perfect. I was overwhelmed after winning race two with full ballast, because to get two double-wins in successive events is something that almost never happens in the BTCC and it shows what an amazing job the team have done with the BMW. It’s drawing us back into contention after Donington Park. We need to keep our expectations in check – there are a lot of quick guys out there. We’re on good form. I feel good in myself and with the car and the team. The title fight really starts here.”

Tom Chilton said: “I said to my dad I’d try and get him a podium for Father’s Day and he said that wouldn’t be good enough, he wanted a win! It was a perfect weekend for me and the team. We’ve managed not just a double podium, but we got the win as well. We’re in it to win it. Everyone in the team is working hard to put all of our knowledge together and make this old girl go faster this year and we’ve done a great job. I’m really looking forward to going to Oulton Park next. I’ll be looking for more of the same.”

Colin Turkington said: “Once again Croft proves to be a great track for BMW, and now for the new 3 Series. It’s been a great weekend for me. I came here sharing the lead of the points and I leave in front on my own, which is exactly where we all want to be. Second, fourth and sixth represent big points and was as much as I could hope for. It’s fantastic to drive a car that feels so good. Next we go to Oulton Park, where we’ve had some great results in the past, and even though I’ll have maximum success ballast, the aim will be to continue scoring big points.”

Stephen Jelley was penalised by the addition of 0.6 seconds to his overall race time for an incident involving Aiden Moffat.

Ash Sutton was penalised by means of a five-place grid penalty for Round 12 following an incident involving Chris Smiley. His licence was also endorsed by the addition of three penalty points

Chris Smiley has been penalised by means of a five-place grid penalty for Round 13 following an incident involving Jack Goff. His licence was also endorsed by the addition of three penalty points