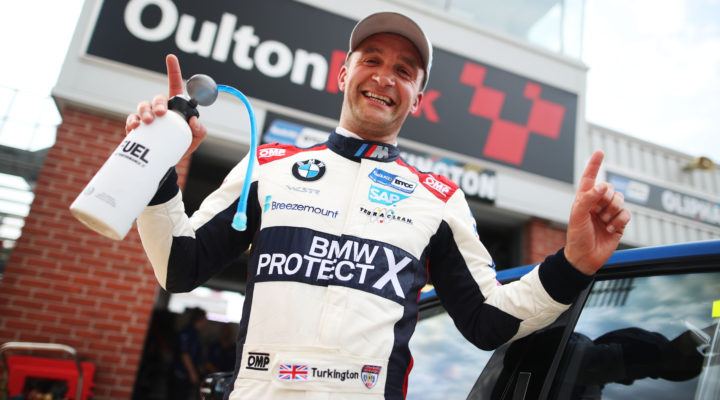 The Team BMW star set a 1m25.825s lap time early on in the 30-minute session and it would be enough to take his ballast-laden 3 Series to top spot. The man himself labelled his effort a ‘one-lap wonder’ after admitting to grabbing slight tow from stablemate Andrew Jordan around the 2.23-mile circuit, but it was still a hugely impressive performance from the current standings leader.

Sam Tordoff was among a number of drivers to try and beat Turkington’s benchmark, but the Cobra Sport AmD AutoAid/RCIB Insurance man eventually fell short by just 0.089s after his first effort had been slightly compromised by traffic.

Halfords Yuasa Racing’s Dan Cammish looked set to challenge too as he set the fastest overall first sector time in the closing stages, but his lap-time gradually ebbed away and the manufacturer driver had to settle for third at the finish. The Honda Civic Type R racer showed good form throughout Saturday, suggesting the Yorkshireman could be a serious contender tomorrow.

Team BMW’s Tom Oliphant ensured that all three WSR cars are inside the top seven on the grid for tomorrow’s opener as he pipped Sterling Insurance with Power Maxed Racing’s Jason Plato.

Ingram was one of several drivers to experience minor excursions across the grass whilst pushing at a maximum, as did the likes of Tordoff and Chris Smiley in the BTC Racing Honda.

Smiley’s team-mate Josh Cook was a surprise omission from the top ten, as was Adrian Flux Subaru Racing’s Ash Sutton. Cook and Sutton currently sit second and third in the overall standings but will start tomorrow’s opening race from 22nd and 13th respectively – the latter gaining a net position due to a five-place grid penalty for Smiley, earned back at Croft.

Rounds 13, 14 and 15 of the Kwik Fit British Touring Car Championship will take place at Oulton Park tomorrow, bringing the curtain down on the first half of the 2019 season. A massive crowd is predicted to descend on the picturesque Cheshire track with many more watching the action LIVE on ITV4 from 11:15am.

Colin Turkington said: “That was a special lap, I’ve been working on it all day. We’ve been slowly making the car better. It’s tough when you start with a heavy car as you’ve got to adjust your expectations. We got a bit of a tow off Andy (Jordan) and I couldn’t get close again. It was a bit of a one-lap wonder! Dick (Bennetts) fancied top six and I’d have been happy with top ten. We’ve not been at the sharp end all morning but the new tyres make all the difference and the 3 Series felt great. Fifteen or 16 laps with the hunting pack behind me it’s going to be tough – a big feed of spinach coming tonight! I’ll just try to enjoy this moment. Poles don’t come along too often. I’m pleased for Team BMW, it’s been a big effort.”

Sam Tordoff said: “I think the heat played its part. The track was definitely fastest at the beginning and I was compromised at the start. We’re only talking hundredths of a second. The boys can be happy with that. I think we’ve got a good chance. Oulton Park is a tough circuit and it’s one you’ve really got to qualify well at. I should be alright to tuck in behind Colin (Turkington) and get my head down. I like this track, it’s one of my favourites – just not so pleasant on a day like today! I’ll go and have a cold bath and cool down.”

Dan Cammish said: “To be honest, I think P3 was all we had today – neither myself nor the car had the time in us to get onto the front row. There was probably another tenth there to be found, but no more. Still, we’re up at the sharp end of the grid, so hopefully we can do something from there. I fully expect Colin (Turkington) to run and hide in the race, with the rest of us fighting over second. I’ve been clawing points back in the championship ever since Thruxton and that’s what we need to keep doing, so if I can climb onto the podium at the end of the race, I will consider that a job well done.”