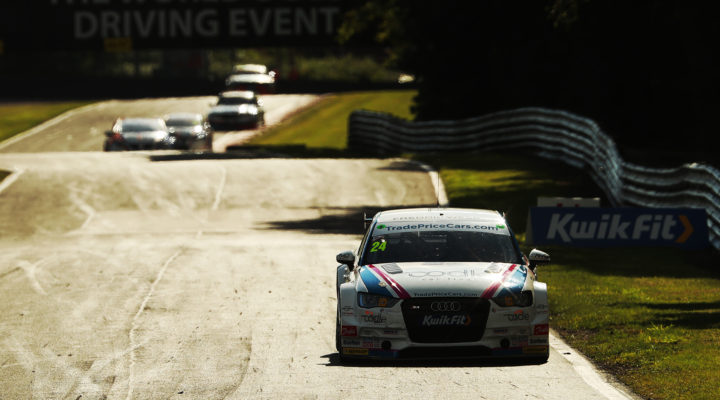 Contact early in race one saw Hill’s machine hampered, although he was able to slip back to 13th place by the finish, picking up points to kick-start his weekend.

Race two saw an eventful round, with Hill gaining and losing positions over the course of the race. The TradePriceCars.com Audi S3 crossed the line in P12, which proved fortuitous in the reverse grid draw, where he started from pole, a first for Hill and the team.

The final, action-packed race of the weekend saw Hill cross the line in first place. Hill’s joy was short lived, however, by the news that an incident between him and Matt Neal was being investigated by stewards. Following this, it was decided that Hill would be given a 20 second time penalty, resulting in him dropping to 14th place in the results.

Fellow TradePriceCars.com driver Mark Blundell showed solid pace in practice, before qualifying 26th for the opening race of the weekend.

Battling hard for position from the moment the lights went out, Blundell was starting to make up places before on-track contact damaged the rear of the car and he was forced to retire when rising engine temperatures saw him pull off in the closing stages.

The Audi S3 showed stronger pace in the second race of the weekend, lapping nearly a second quicker than in race one, en-route to 23rd place.

Despite dropping back to 25th on the opening lap of race three, Mark was able fight his way back up the order to take the flag in 18th place for his fourth top 20 result of the season.

“The BTCC is all about small margins and ultimately, a small error has cost me my maiden win in the series,” said Hill. “I’m absolutely gutted not just for myself, but also for the whole team. It was a misjudgement when we were battling for position and there was no malice whatsoever on my part.

“Until that point we’d worked hard to improve the car as we were struggling for grip in the first race and the boys had done a great job to give me a car that was a fast as it was in that final race.

“Whilst I’m disappointed with the way that the weekend has drawn to a close, it only makes me more determined to come back after the summer break to try and fight for the win we should have had here.”

“We’ve made progress again this weekend and whilst it might not show externally in the results, we can see that progress internally within the team,” Blundell said. “Performance wise, I feel I’ve closed the gap to Jake again this weekend and now I’m hoping to get some solid running at the upcoming test to try a few things out that we can’t do on a race weekend.

“I have a better understanding of the technique required to drive these cars now and hopefully that will pay off in the test so we can work to get the Audi better suited to me for the second half of the season.”