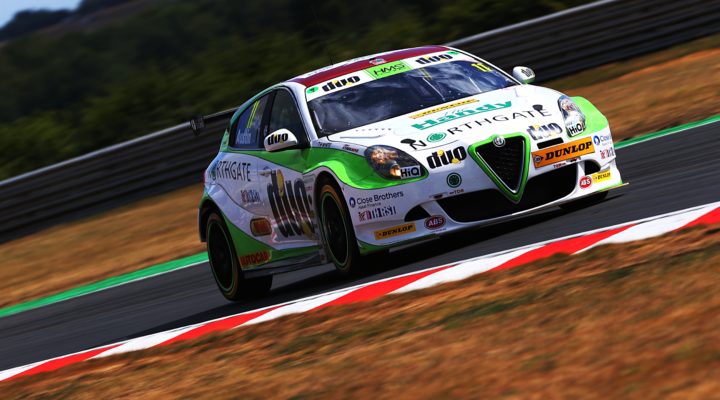 The BTCC will be back on track this week as the traditional summer break is punctuated by a two-day Dunlop tyre test at Snetterton on 16/17 July.

A packed entry of teams and drivers will take part at the Norfolk circuit, with Laser Tools Racing’s switch to the Infiniti and Rob Austin’s return to BTCC machinery providing the main talking points.

Multiple race-winner Austin is taking a sabbatical from the BTCC this season, but the Evesham driver is now preparing for a full-time return in 2020. Austin will be back out in the HMS Racing Alfa Romeo on both Tuesday and Wednesday, a car which he piloted to podiums last year.

“It’s great to get back behind the wheel and dust off the cobwebs,” said Austin. “I am actually really enjoying this season as I’m still involved from both a media and commercial point of view. Taking some time out helps give you a different perspective on things and I have learnt a lot simply by standing on the other side of the fence.

“There is nothing quite like being out there, however, and that’s what we’re working hard on for 2020. The test will be a great opportunity to run against the regulars from this season and see where we stand. I’m really looking forward to it.”

“We are fully committed to returning and the work that we have already put into the car is evidence of that,” said team boss Simon Belcher.

“We are keeping a very close eye on the championship and we want to show that we warrant our place there. Hopefully, the Snetterton test will show that.”

Every BTCC team – with the exception of BTC Racing – will be represented around the Snetterton 300 layout with the vast majority of this year’s driver line-up competing.

The Team HARD stable has confirmed that both Max Coates and Ethan Hammerton will get some running alongside its regular racers, although Bobby Thompson is set to sit this one out. Trade Price Cars boss, Dan Kirby, makes his BTCC debut in the team’s Audi S3, but both Jake Hill and Mark Blundell will also take part.

Arguably the biggest news in the build-up to the test was last week’s announcement that Aiden Moffat will be switching to the Infiniti Q50 for the remainder of the season, with the Scotsman getting a maiden run in the car during the test.

“Our 2020-spec Infiniti is a far cry from the 2015 version, incorporating all the latest NGTC specifications,” said Moffat. “The car has been completely re-engineered. And, of course, the benefits of a fantastically aerodynamic design, plus rear-wheel-drive!”

The test will run from 0900-1230 and 1330-1700 on both days, providing a total of 14 hours of on-track action. Public can gain access to the circuit from 8am whilst Tyrrells Restaurant will be open throughout.

The BTCC website and official social media channels will bring you updates during the test, whilst TSL will provide LIVE timing here.