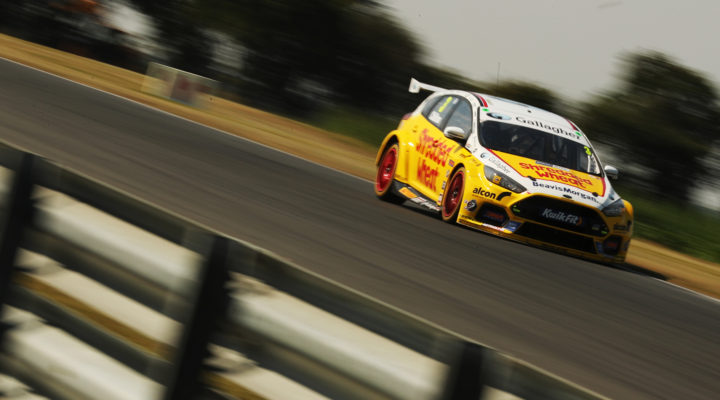 Motorbase man Tom Chilton has set the pace on the opening morning of the two day tyre test at Snetterton.

The Surrey driver ran a qualifying simulation mid-morning, which was enough to vault him to the top of the times.

“To be honest we really gave it some there,” he said. “We’re obviously testing different compounds and set-ups, but this is a real chance for us to push forwards with the car.

“We has a pre-season test in Spain but the conditions weren’t great there, so this is a vital few days in preparation for the rest of the season.”

Not only did Chilton top the times, but the Shredded Wheat-backed racer also led the lap counter, clocking an impressive 44 tours of the Snetterton 300 layout.

Tom Ingram, Rory Butcher and Jason Plato made it six different car models in the top six as the Corolla, Civic and Astra all showed good speed in the early running.

A BMW trio of Andrew Jordan, Tom Oliphant and Stephen Jelley followed in the order, whilst Yorkshireman Sam Tordoff rounded out the top ten in the AmD-run Honda Civic Type R.

Rob Austin returned to BTCC action this morning, completing 12 laps in the Alfa Romeo, whilst Dan Kirby made his series debut in the Audi S3.

Fans will have to wait until this afternoon for the first on-track glimpse of the Laser Tools Racing Infiniti Q50 as the squad continued preparing the car this morning.

Click here for the final classification from the morning session at Snetterton.