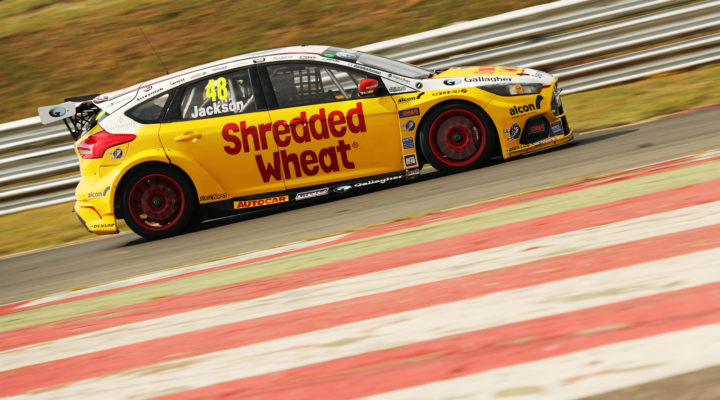 Team Shredded Wheat Racing with Gallagher is looking to double up in the two-day BTCC tyre test at Snetterton as Ollie Jackson hit top spot earlier this morning.

Team-mate Tom Chilton led the opening day, but this time it was Jackson grabbing the headlines ahead of the final afternoon of running.

“It has been a really productive test so far,” said Jackson. “We’ve learnt a lot and written some things off too, but we seem to be in good shape for the rest of the season.

“My year so far hasn’t really included the results we’ve felt we’ve deserved. We’ve had some bad luck and made a few minor errors that have been unduly punished, so overall we just haven’t had the rub of the green.

“Of course topping the times in testing doesn’t win you any points, but it’s a good feeling and a great boost ahead of the event here in a few weeks’ time.”

Mac Tools with Ciceley Motorsport’s Adam Morgan made it into the top ten yesterday and they’ve improved again to take third this morning, as the Mercedes A Class looks to recapture its form in the second half of the season.

Sam Tordoff has been on the pace throughout both days in the AmD-run Honda and the Yorkshireman was fourth this morning. Tordoff has ended his test run this lunchtime as he now prepares for his wedding tomorrow afternoon!

Jake Hill (Audi), Rob Austin (Alfa Romeo) and Matt Simpson (Honda) were next on the timesheets before a trio of BTCC big hitters completed the top ten positions.

The BTCC cars are back on track at 1330 and will run through to conclude the test at 1700.

Click here for the final classification from the morning session of Day 2 at Snetterton.