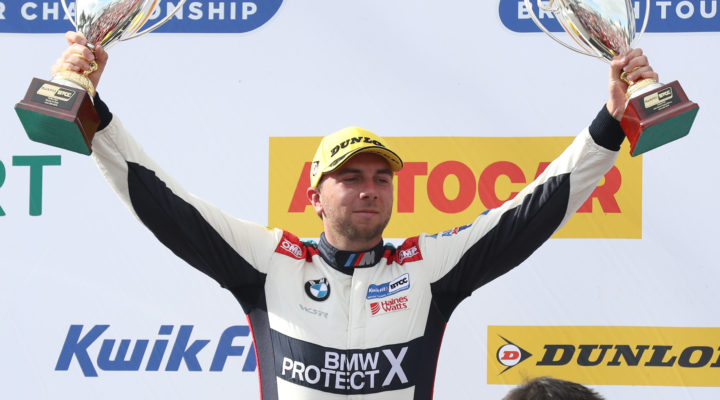 As the second half of the BTCC season approaches we take a look back the most successful weekend so far for Tom Oliphant.

The Team BMW man delivered on home turf at Oulton Park last time out, scoring a career-best finish of second place in the reverse grid encounter, as well as a further two top six finishes.

The final race meeting before the BTCC annual summer break proved to be a triumph for West Surrey Racing as a whole, with Oliphant also claiming outright honours in the Jack Sears Trophy for the first time in his career to add another piece of silverware to his 2019 tally.

The team had high hopes for the fifth event of the season, with the annual visit to Oulton Park having added significance for Oliphant, having been born and raised only five minutes down the road in Tarporley.

At the wheel of his BMW 330i M Sport, the British Racing Drivers’ Club Member secured seventh on the grid in qualifying, making it three WSR BMW’s inside the top seven.

Bogging down as the lights went out for race one, Oliphant held position as the field streamed through Cascades and settled into a good rhythm. Remaining on the back of the top six, he soon gained a spot as Matt Neal retired on lap five – bringing out the safety car.

A resolute defence from Sam Tordoff’s Honda left the Cheshire racer to settle for sixth place, kicking his race day off on the right note.

The 28-year-old made a blistering start in race two, rocketing into fourth as the 30-car grid streamed through the opening sequence of corners.

Beginning to apply pressure to third-placed Dan Cammish, a second safety car in the latter stages of the 18-lap encounter hampered Oliphant’s momentum. Holding station in the remaining laps, the 2015 Ginetta GT4 SuperCup champion brought the car home to finish fourth, narrowly missing out on the rostrum.

Virtue of the reverse grid draw, Oliphant lined up in ninth for the final race of the day. It proved to be a frenetic affair from start-to-finish, with Oliphant picking his way through the early drama to rise to fifth place.

Latching himself onto the back of Tordoff for the second time in the day, Oliphant kept the pressure on as the action unfolded before scything his way past the Honda driver in the closing stages. The Cheshire racer then capitalised on a mistake from a driver ahead to grab another spot.

Crossing the line in third place, Oliphant was later promoted to second position following a post-race time penalty to on-the-road winner Jake Hill. In addition, the BMW man’s best weekend in the series was topped off with the Jack Sears Trophy success.

Oliphant has been back in action since, at the recent Dunlop tyre test at Snetterton, where he ended up 17th overall.

As we approach the end of the annual summer break, resuming at Snetterton on 3/4th August, Oliphant is 11th in the Drivers’ Championship, whilst Team BMW sit first in both the Manufacturer/Constructor and Teams’ Championships respectively. Oliphant has also closed the gap in the Jack Sears Trophy.

“To have my best ever weekend in the BTCC at my home circuit is just amazing, and to top it off with a second place finish is phenomenal,” said Oliphant.

“Qualifying didn’t go our way but we played it smart throughout race day and knew we had the pace to run at the front. Making progress in every race set us up for that race three result; we had a bit of luck with incidents that happened elsewhere but we were in the mix throughout.

“To win the Jack Sears Trophy [at Oulton park] is just the cherry on top too. Overall it was a fantastic weekend for the team.”