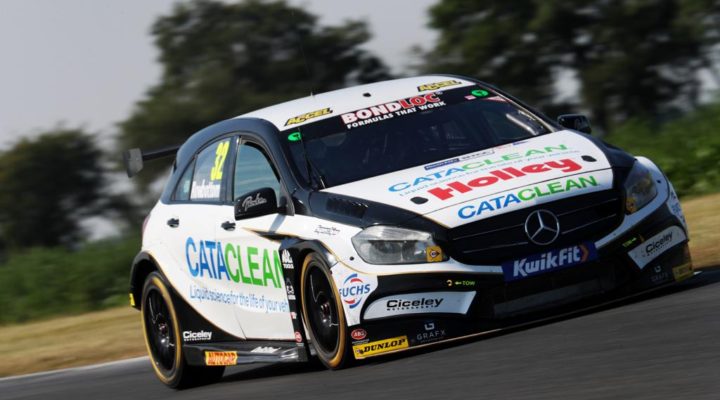 Cataclean Racing has unveiled a revised look to its Kwik Fit British Touring Car Championship Mercedes-Benz A-Class, thanks to a trio of new brands taking up prominent positions on the car’s livery.

Cataclean’s American distributor, Holley, has seized the opportunity to be involved in the world’s foremost tin-top championship and its increased American television coverage to highlight two of its key brands: Accel and Superchips.

Holley has been a leader in fuel systems for over 100 years, with its carburettors/injection systems powering every NASCAR Cup team and nearly every NHRA Pro–Stock champion for four decades.

Accel specialises in spark plugs, spark plug wires and ignition boxes along with myriad other products, while Superchips specialises in extra performance from vehicles by installing an engineered performance calibration on a vehicle’s computer, yielding improved fuel economy, optimised shift patterns, and an elevated driving experience.

“We are delighted to be able to welcome Holley, Accel and Superchips to the BTCC,” said Ross Baigent, Managing Director of Cataclean Global Ltd. “We are seeing the benefits of being involved with the championship through increased sales and a far greater presence and awareness, and the boost that the BTCC is enjoying on American television makes this a perfect time for Holley to come on board.”

“The BTCC is working exceptionally hard to help teams maximise their sponsors’ exposure. The fact we have been able to attract a brand such as Holley to BTCC is proof that the package works. This gives Cataclean the chance to work much closer with our American distributor to help it promote Accel and Superchips alongside Cataclean in the UK.

“Equally, Holley recognises it has a great opportunity to utilise and capitalise on the global reach of the championship, raising brand awareness within its domestic US and export markets.

“We are confident that they will enjoy the same rewards that Cataclean has done as we enter the second half of the 2019 season.”