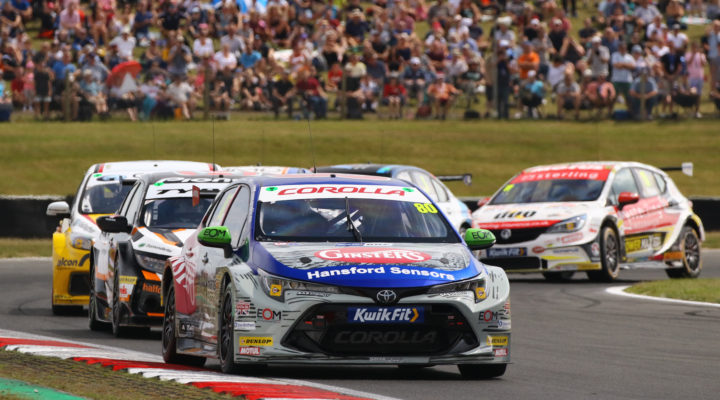 Tom Ingram has kicked off the second half of the BTCC season in the best way possible by producing a dominant display in the opening race at Snetterton.

The Team Toyota GB with Ginsters driver stormed to a first pole position for the new Corolla during yesterday’s qualifying session, and he duly converted that success into a second race win of the season.

While Ingram’s first victory of 2019 came in the reversed-grid race three at Donington Park, this was the first time that the car has proven to be the pace-setter from the outset. The Bucks ace fended off Halfords Yuasa Racing’s Dan Cammish in the early running but last year’s runner-up gradually stretched his legs to win by more than three seconds.

“It’s hot, hard work out there,” said Ingram. “It’s about 25 degrees above ambient when you’re in the car! That was just how I wanted it to go. I was happy to try and get a gap at the start and manage it from there. I was more than happy to make it a boring race for me!

“We’ve made a massive step forward at the test. It was so important for us. The way that the BTCC works over a race weekend, time is so tight and you can’t try the things you’d like to. The team have worked so hard to get every single last bit out of it. It was better there than the Avensis ever was, and if we’re there already – it’s a real good sign.”

“That’s a good 19 points on the board,” said Cammish. “I didn’t have the best of starts. It looked close to start with but I couldn’t keep up and we didn’t have enough in the car. He had a bit of a quicker package this morning. I could see where he was good and couldn’t match it. They’ve worked hard, we all are. They found time that we couldn’t between FP2 and Quali. I’m not just here to beat him though, I’m here to beat the rest as well.”

“We’ll take that,” responded Tordoff. “It was a good start to the day. Dan (Cammish) was in a bit of a different race to me, even with the soft tyre on the car. The hard tyre won’t be the tyre to choose. I’ll ask my team-mate to see how he got on with it but we’ll try and get some more points in the bag in race two.”

The final place on the rostrum looked to be heading the way of Tom Chilton before a puncture fired his Team Shredded Wheat Racing with Gallagher Ford Focus out of the race.

The lead trio all ran the soft Dunlop Sport Maxx tyre with the BMW duo of Colin Turkington and Andrew Jordan being the first medium compound runners home in fourth and fifth respectively.

Jordan was involved in the most high profile manoeuvre of the race as he muscled his way past Jason Plato on lap 10. Both cars touched through the Esses and Jordan completed the move at the Bombhole.

Rob Collard followed his Sterling Insurance with Power Maxed Racing team-mate past the chequered flag to take seventh, ahead of Ollie Jackson in the Shredded Wheat-backed Focus. Jackson was involved in an earlier incident which led to the retirement of Halfords Yuasa Racing’s Matt Neal, after the pair made contact.

The top ten positions were completed by Matt Simpson (Simpson Racing) and Jake Hill (TradePriceCars.com). Ninth place for Simpson was his best result of the season, having only previously scored one championship point so far, whilst Hill was the first driver to finish on the Dunlop hard tyre.

A special mention for Aiden Moffat and Laser Tools Racing as the Infiniti Q50 finished just narrowly outside of the points on its debut.