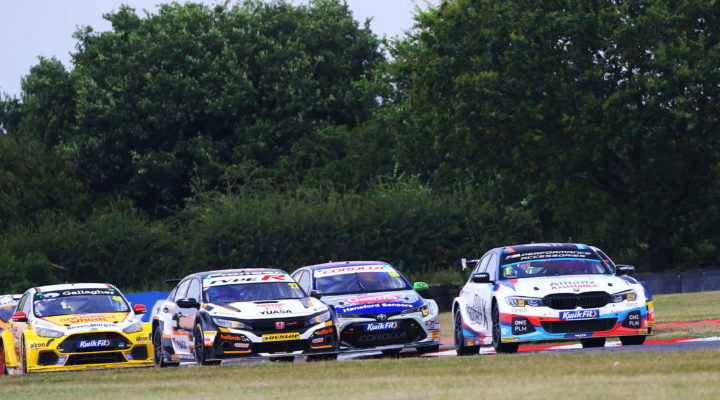 Thruxton is set to host the Kwik Fit British Touring Car Championship for the second time in 2019 as the series once again heads to Hampshire for Rounds 19, 20 and 21 next weekend (17/18 August).

This season has been as spectacular and unpredictable as ever, producing seven winners and 17 podium finishers with four events to come. Reigning champion Colin Turkington tops the table ahead of Andrew Jordan, with Rory Butcher and Josh Cook flying the flag for the independent teams in third and fourth respectively.

The BMW drivers at the head of the championship have collected five wins apiece so far with Turkington scoring two further podiums to Jordan’s three. Jordan has recovered manfully since a nightmare Donington weekend – three non-scores earlier in the year – with a dominant double victory at BTCC’s first visit to Hampshire in May, but the Pirtek sponsored driver remains some 36 points behind the Northern Irishman.

At a track where the Hondas are regularly quick, there are plenty of on-form Civic drivers who will be looking for a strong result with the marque’s UK base residing in nearby Swindon. Fresh off the back of a win at Snetterton, Rory Butcher can be hopeful of a good weekend at Thruxton, backed by a podium finish during the first visit of the year. Bath-based Josh Cook is another Type R driver to have enjoyed exceptional weekends at both Thruxton and Snetterton. Likewise, Dan Cammish scored two podiums at each of those meetings.

Ash Sutton is sure to be fired up in his Subaru Levorg after a thrilling wheel-to-wheel battle with ex-teammate Jason Plato at Snetterton, ultimately ending in disaster for the BMR driver. Sutton finished on the podium at Thruxton earlier in the year which bodes well in his bid to take to the top step in 2019. Team Toyota GB with Ginsters and Tom Ingram are another pairing to watch in the coming races after correcting a damping issue during the in-season test, followed by a lights-to-flag victory at Round 16.

Off-track, there will be something for everyone with a variety of activities around the venue including skid pan rides for all ages, an extensive display of Thruxton’s driving experience supercars and racing cars and a fantastic trade village to explore. There’s also evening entertainment in the Thruxton Centre on Friday and Saturday.

The fast and flowing ‘Hampshire Speedbowl’ is sure to provide even more spectacular racing up and down the field, with commitment and precision required at every corner – most notably ‘Church’ – to string together the perfect lap. The championship battle is primed to intensify at Thruxton next weekend.

“Snetterton went to plan for us,” commented championship leader Turkington. “It was always going to be a tough weekend given the official test day back in July, where everybody was able to get a feel of the circuit and get up to speed – we knew it was going to be ultra-competitive.

“It was great to win again, and win with a heavy car heading into the weekend as championship leader with the maximum complement of success ballast on-board. We were consistent over every session and we’re hoping for more of the same at Thruxton. We’ve a good knowledge of the circuit, this being our second visit of the year so it’ll make for a strong starting point.

“The BMW 330i M Sport was quick there earlier this season and looking back, we’d come out of the blocks fast. Now, as the season’s played out, people have closed that gap. The front-wheel drive cars went well at Snetterton last weekend and it’ll be even more difficult, for sure, this time around at Thruxton.

“The focus is firmly on myself at this stage of the season and maximising opportunities wherever I can. There’s a lot of competition from any number of drivers – not just the guys directly behind me. We’ve completed six of ten race weekends and there’s still a huge amount of racing left.”

“We’re thrilled to welcome BTCC for a second time in 2019,” enthused Pat Blakeney, Thruxton Group Operations Manager. “After such a successful event in May, we can’t wait for the return of the championship to the UK’s fastest circuit.

“As always, Thruxton produced some great racing earlier in the year and we’re hoping for more of the same next weekend, the nature of our track requires a lot of nerve from the drivers and I think the fans enjoy that. There’s also plenty of activities for the whole family to enjoy away from the track!”

Tickets for the BTCC’s visit on 17/18 August can be purchased on the gate, starting at £17 for Saturday (qualifying) and £34 for Sunday (race day). Children aged 13-15 get in for £5 on Saturday and £10 on Sunday; accompanied children aged 12 and under will be admitted free of charge.