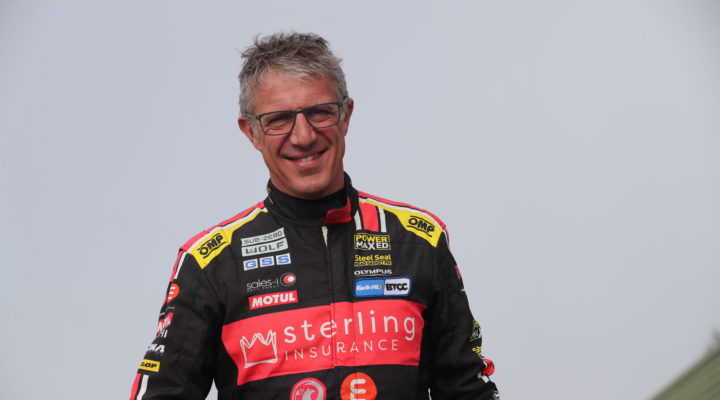 Sterling Insurance with Power Maxed Racing headed back to Snetterton in Norfolk for rounds 16, 17 and 18 of the Kwik Fit British Touring Car Championship.

Jason Plato missed the chance to get on the front row during qualifying with a slight error at the final corner but still ended up in an impressive P6. Collard also improved following his first run but was hampered on his fast lap to finish in P10.

Both drivers made solid starts in race one, holding positions through the first corner with Collard slipping through into P8 as the field headed around lap 1.

Plato and Collard eventually found themselves line astern, Collard eager to get past, Plato eager to retain P6 as the Astras crossed the line.

Race two saw Plato start from P6, with Collard hoping to minimise his losses from P7.

Again, both Astras made good getaways, running side by side into turns 1 and 2, making it a challenging four abreast. Contact between the team-mates caused both to drop back, Plato in P8, Collard in P12. The next laps saw a frustrated Plato lose time, before making an opportunistic lunge to move the Sterling Insurance with Power Maxed Racing Astra back into P6 and closing onto BMW’s Colin Turkington before running out of laps.

Further back, Collard managed to haul his Astra back into the points with a P14 finish after dropping places at the last corner.

A favourable reverse grid draw saw Plato start P3 for race 3, albeit on the hard tyre. Back in P14 Collard was on the soft Dunlop, looking to exploit the handling of his Vauxhall Astra.

At the front, Plato made a move into the hairpin for the lead. This was followed by a thrilling game of cat and mouse with the Subaru of Ashley Sutton. Momentarily losing the lead, Plato immediately fought back, fighting fire with fire in a no holds barred contest.

Meanwhile, Collard’s attempts to take advantage of the soft tyre were hampered in the early stages as the Hampshire driver dropped down to P14 with a lot of work to do.

As the race entered its final stages, Plato found himself in a three-car standoff before contact with Sutton would drop Plato back to P4.

Collard gritted his teeth to attack the final podium place from P7 and, despite a big slide in order to avoid contact, closed up again before finishing in P4 with Plato rolling through in an eventual P5.

Subsequent Stewards enquiries adjudged Plato to have been culpable for moves on Smiley and Sutton and the Oxford-born driver was penalised by the addition of a cumulative 15 seconds to his overall race time.

“Overall it’s been a good weekend,” said Collard. “Being in the Top 10 Saturday proved that I’m still on the pace and that the car is there. That last race is a lot more like the racing that I like! Starting on the Soft Tyre, after five laps or so I was thinking that I was never going to catch the front runners, but a few spots of rain gave us the chance to catch those on Hard Tyres, so we just had a that edge. I’m looking forward to Thruxton.”

“That was good fun, I was enjoying myself,” said Plato. “I was on the wrong tyre, obviously, compared to Ash, but the car went well and we held our own. Unfortunately, 3 into 1 doesn’t go, so I had to give Rory a bit of space on my left, understeered a bit, and the rest is history.”

“JP drove with pure class; it was great to see a proper driver use his talent and experience to full effect,” said Team Principal Adam Weaver. “This is exactly what the fans pay to see; close racing between proper drivers. The outcome wasn’t what we wanted, but we’ll be back in just a couple of weeks to bag some more points. Rob also had a strong meeting and it’s great to see him getting stronger as the season goes on.”