Pace and poor luck for Ciceley at Snetterton 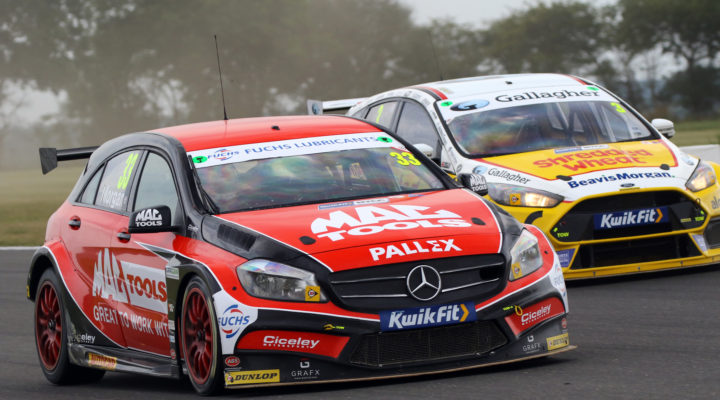 Mac Tools with Ciceley Motorsport’s Adam Morgan endured a frustrating time back at Snetterton, with his Mercedes-Benz A-Class showing improved pace despite him suffering a bout of poor luck that compromised his results.

After a positive mid-season test session at Snetterton, Morgan headed to Norfolk in positive mood and was an encouraging ninth fastest in the all-important qualifying session.

From ninth on the grid for the opener, he made a good start and was running confidently in the top ten on the Dunlop soft tyre, battling his way up into eighth place, but, on lap six, an issue with his gearbox forced Morgan to retire. He said: “I placed the car down into second gear at turn two, I heard a bang and then a rattle and then my race was over. We needed a new gearbox for race two and that put us at the back of the grid. I was really disappointed because the pace we had was looking good and we were running in the leading pack.”

For race two, Morgan lined up 28th on the grid with a huge task ahead of him. However, his competitive spirit shone through as he blasted up to 18th place, working his way through the traffic in uncompromising form. A delay when he became tangled up with Stephen Jelley’s BMW cost him time and meant that he picked up some damage, but he continued to push and hauled his dog-eared Mercedes-Benz to 18th place.

“I made a good start but then there was a bit of contact on the way to the first corner when four of us went side-by-side and that was a bit tight!” said Morgan. “I caught up to a battle with Stephen Jelley, Josh Cook and Senna Proctor all involved and it was hard to get through that quickly and then there was more contact which turned around Stephen. I had to try to avoid him and picked up some damage, which bent the steering, but also it damaged the radiator and the cooling system so that meant that I needed to finish rather than look at any heroics after that. It was frustrating because the car went really well early on but it’s a legacy of being at the back: you are in jeopardy with all the traffic around you.”

For race three, the A-Class lined up 18th on the grid. However, despite starting on the fringes of the points and feeling optimistic for a solid result, more bad luck was waiting to ensnare Morgan. The damage in race two had been repaired with a spare radiator pack, but the car was running hot and that temperature rise caused the power steering to trip. Hanging on to the car without power steering became increasingly difficult and Morgan decided that it was best to retire – forced into parking the car from 16th.

“It just wasn’t our weekend – again,” he added. “The final race was affected by the damage in race two, really. The positives are that we worked hard on set-up, learnt a few things and made steps forward, so I can take that to Thruxton this weekend, especially as we have raced there already this season and have data to measure against. There are reasons to be buoyed by Snetterton but it is so frustrating for all of us in the team to come away with damage and little tangible to show for it. We’ll fight on, though!”

The second Ciceley car, running under the Cataclean Racing with Ciceley Motorsport banner, of Dan Rowbottom qualified mid-grid, 17th, and ran up in 13th in the first race, battling with Ash Sutton’s Subaru. Rowbottom was unable to get by, and was backed up into Chris Smiley’s chasing Honda. That dropped Rowbottom to 15th but he was still able to secure a second points finish of the season. A first lap clash with Aiden Moffat’s Infiniti Q50 shattered a front-left wheel rim and Rowbottom was unable to limp the car to the pit lane without causing further damage, forcing retirement from race two while a gearbox issue stopped his progress in race three despite good initial pace.

“Our race reports are getting harder and harder to write each week,” said Norman Burgess, Commercial Director of Ciceley Motorsport. “We as a team have endured a terrible year, we are a top 10, even a top five team historically, and absolutely nothing is working for us so far this year, it’s so frustrating.

“Our guys have worked tirelessly on the two cars this weekend and results just haven’t come our way, again. Both Adam and Dan drove really well and certainly had the pace to score better points finishes.

“We picked up damage that then had mechanical consequences later down the line and when we reflect on the weekend, it is clear that the pace from both of our cars isn’t being represented in the results.

“We will analyse the gearbox issues that we had, but also look at the positives of the pace and set-up on the cars and push forward to Thruxton. Our Mac Tools, Cataclean and other team supported guests all enjoyed the spectacle and the action provided by the Kwik Fit British Touring Car Championship and we look forward to bouncing back this weekend in Hampshire…”