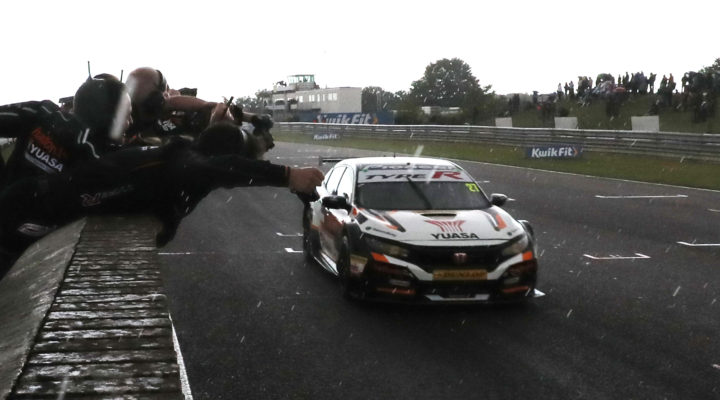 Dan Cammish – scorer of eight podiums in the previous 14 races – has taken the first win of the season for Halfords Yuasa Racing in the reversed grid bout at Thruxton.

A sticky start in the second contest sent Cammish slightly down the order, and lightning looked like it might strike twice when he fell to third from the front row in the final encounter.

It was the fast-starting BMW of Tom Oliphant that had nipped in front of Cammish, with Sterling Insurance with Power Maxed Racing’s Rob Collard leading the way.

The lead trio pulled away whilst battles commenced throughout the order, but it was all eyes on the front-runners as Cammish slipped into second midway through the scheduled 16 laps.

With grey skies looming rain began to fall on the classic 2.4-miles of Tarmac and cars immediately twitched around the fastest circuit in the country.

The moment of truth came on lap ten when Collard’s Vauxhall Astra wiggled through Church, dropping his rear-left wheel on the grass in the process. With a loss of momentum on the run to the final chicane Cammish was able to blast his Honda Civic Type R around the outside and into an unassailable lead.

“A few hours ago I thought this was never going to happen,” said Cammish. “We dug deep all day today, worked hard on the car in qualifying and we’ve chased the car all day today! Rob (Collard) was good on the brakes, where we usually are, so it made it doubly tough.

“When the rain started coming down I was thinking ‘do not drop this’. I wanted to know from the team just how much rain was coming down, and to do it with 30kgs on-board – that’s even better. My best ever weekend with first, second and fifth. The last lap was an ice rink but Rob had it all on trying to keep it on the road himself!

“We’ve been racing the BMW and fair play to them. I’ve been consistently punching above my level and haven’t had the rewards until right now. I’m fighting back from a deficit from the first two weekends and there’s a lot of racing to go. I’m in one of the best seats in British motorsport. There’s a long line of people that want my job and I’ve got to continually prove myself and make myself better.”

Collard held second until the finish but it was Oliphant who was now struggling in the damp conditions as he dropped to seventh, meaning Matt Neal would join his Honda team-mate on the podium.

“Until the rain came down we had it managed,” reflected Collard. “I thought we were doing nicely in a bit of a cat and mouse. You’re trying to gauge how wet each corner is, and that moment at Church was enough for the Honda to power past.

“I thought P1 was on, but I’m still pleased for the team and Vauxhall. It’s great to be back at the sharp end of the grid. That race was brilliant at times, really good fun.”

Mac Tools with Ciceley Motorsport’s Adam Morgan completed a sensational day with fourth place – following up his double podium from the opening two races – whilst Jason Plato proved what might have been by arguably being the fastest car on track. The BTCC legend started the race in 13th and ended it fifth as he continues to chase his first win of 2019.