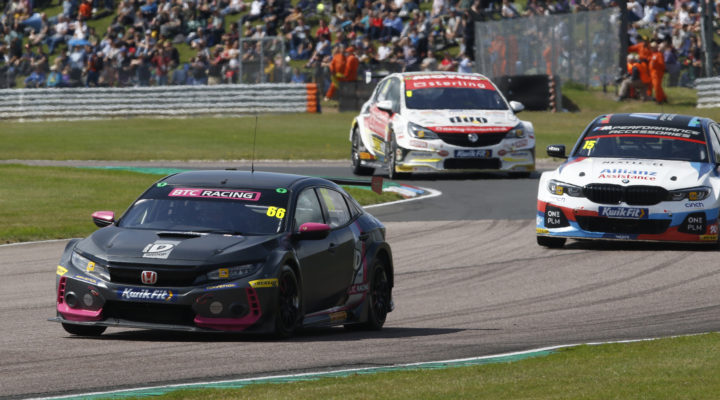 The Honda Civic Type R driver made one of the moves on the season on lap 4 as he went from third to first in the blink of an eye.

The success ballast-laden AmD car of Sam Tordoff held the advantage in the early running but the Yorkshireman had Adam Morgan’s Mercedes and Cook’s car swarming all over the back of him.

Morgan made his attempt down the inside having exited Church – the fastest corner in the country – while Cook tried the outside on the run down to the final chicane. All three cars made it through without any contact and emerged across the start/finish line with Cook leading the way.

Cook never looked back, winning from Morgan by more nearly two seconds at the finish.

“That went to plan!” said Cook. “It was a bit hairy at the start and the overtake into the chicane was too! I was clear of Sam (Tordoff) and had to outbrake Adam (Morgan). I was on the outside and had to brake as late as I dared and made it stick.

“I was working hard out front because of Adam and I had to be mindful of the tyres around here too. We’ve had a few rounds where we’ve struggled with the weight but we’ve gone well here. Credit to the team. We’ve had our heads down working hard.”

The eventual race winner brought Mac Tools with Ciceley Motorsport’s Morgan along with him as the Lancastrian scored his second successive podium of the day.

“After our recent form, I wasn’t expecting this,” said Morgan. “The car’s on rails this weekend. We’re carrying P3 weight and you’re careful over the first couple of laps with kerbs and getting on the power but I settled into it and kept pushing and pushing.

“It feels like the car used to. I saw I’d got a good run on Sam (Tordoff) then Josh (Cook) appeared to my left. It was a mega run for him. Fair play!”

A huge scrap for third ensued behind the lead duo with Tordoff often having a line of nearly ten cars stacked up behind him. Unfortunately for the race one winner, the pressure eventually told on lap 11 as he was shuffled down the order.

Team BMW’s Tom Oliphant and Halfords Yuasa Racing’s Matt Neal ran in third and fourth respectively until late on with the final place on the podium being decided at the last corner. Neal’s Honda Civic Type R got a great run on the 3 Series ahead of him and the triple BTCC champion nipped through to reach the rostrum through the final chicane – crossing the line just 0.080s ahead of Oliphant.

Honda man Dan Cammish had to settle for fifth – paying the price for a poor getaway from the front row – whilst Sterling Insurance with Power Maxed Racing’s Rob Collard claimed sixth. The Hampshire driver’s top six result was further rewarded post-race as his number was chosen at random for pole position for today’s final race.

As he did in race one, BMW Pirtek Racing’s Andrew Jordan edged out title rival Colin Turkington. Jordan grabbed seventh, with Team BMW’s Turkington two spots back  – the Toyota Corolla of Tom Ingram wedged between them in eighth.

Tordoff eventually had to settle for tenth after his early race efforts at the head of the field.