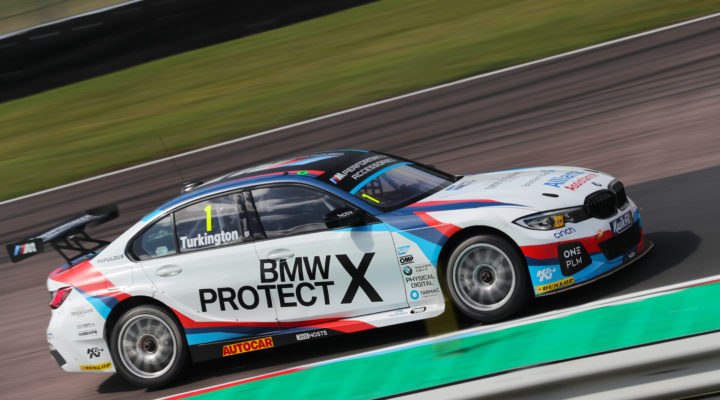 The BMW 3 Series continued to show its speed with another impressive display from all three drivers in Rounds 19, 20 and 21 of the 2019 Kwik Fit British Touring Car Championship at Thruxton.

Reigning champion Colin Turkington demonstrated his consistency with a trio of points hauls in his 330i M Sport while West Surrey Racing team-mate Andrew Jordan closed the gap to the Northern Irishman at the top of the standings with three solid scores of his own.

Meanwhile, Tom Oliphant was on form all weekend and came within inches of a podium finish for Team BMW in race two before his charge to the rostrum was scuppered by a late rain shower in a dramatic final race of the day. He still managed his best BTCC meeting to-date.

The squad’s impressive haul maintains BMW’s position at the top of the Manufacturers’ table with just nine races remaining this season.

Qualifying on Saturday was tough for the success ballast-laden duo of Turkington and Jordan, with the pair managing just 13th and 12th on the grid respectively.

Oliphant had more joy and slotted his 3 Series into seventh, with the 28-year-old able to move forward and record an excellent fifth-place finish in race one.

Jordan showed nerves of steel to thread his BMW through the traffic on lap one and enjoyed a thrilling battle with team-mate Turkington, nipping past when Ash Sutton pushed the reigning champion out wide.

Jordan eventually lost ground, however, leaving the BMW Pirtek Racing ace just one spot ahead of Turkington in 12th at the chequered flag.

The pair of title rivals continued to make steady progress through the field in race two, pulling a number of impressive moves as they fought their way into the top ten.

The BMW 330i M Sport proved the perfect tool as Jordan and Turkington went on the attack, with the former rising five places up to seventh and chipping away at his team-mate’s championship lead while the latter jumped four positions up to ninth.

Meanwhile, Oliphant got his head down after a lightning start and pulled an excellent move on Rob Collard before passing Sam Tordoff for third and looked set to seal a well-deserved podium, only to lose out to Matt Neal on the final lap.

The reverse-grid draw left Oliphant third and in the hunt for silverware again, with the Cheshire-born driver rocketing his 3 Series off the line and into contention for the race lead by the complex.

The BMW ace found his way past Cammish to sit in a provisional second but unfortunately couldn’t hold back the eventual race winner and an untimely rain shower in the closing stages saw Oliphant wind up seventh.

Jordan and Turkington were embroiled in the midfield action for the majority of race three, with the former going wheel-to-wheel alongside Tom Ingram on more than one occasion, and they again came home in close company with Jordan tenth and Turkington 13th as they navigated the wet conditions.

The results mean Turkington holds a 30-points advantage over Jordan at the top of the Drivers’ Standings while Oliphant sits 11th.

BMW has maintained its spot at the summit of the Manufacturers’ Standings while Team BMW sits second in the Teams’ order.

“It’s been a tough day and a tough weekend,” said Colin Turkington. “The qualifying result has determined our raceday because it’s incredibly difficult to get yourself out of the pack when the field is so evenly-matched.

“We knew [on Saturday] night that the key here would be to minimise the points loss, and finishing all three races at least did that. The car was better in race three but when you start P9 or so, it’s very hard to get through. I thought we were in a better place but when the rain came down it was very tricky.

“Hopefully this is our one difficult weekend. It was hard graft for not very much reward – we’re not used to being outside the top ten. If this is the worst day we have points-wise all year, I’ll take it. I’m still 30 points ahead in the championship, which is more than a race win, and next we go to Knockhill, which is a track where the BMWs have always gone well.”

“I’ve been the top BMW points-scorer in all three races and in qualifying, and that’s the first time it’s happened, so I’m very pleased about that,” said Oliphant. “We’ve had the 3 Series in the sweet spot from practice onwards and that’s given me a lot of confidence to drive really hard all day. It’s a bit disappointing to miss the podium in race two by less than a tenth of a second, and for the rain to come in race three when I was on course for second or third, but I’ve won the Jack Sears Trophy for the round, brought myself right back into contention for that title, and had three clean races and a big points haul. If we can take this form into Knockhill, where the BMW’s rear-wheel-drive should be a big help, we can have another good weekend there.”

“It’s been a tough day, but the big positive is that I’ve taken some points out of Colin’s lead at the head of the championship,” said Jordan. “Both of us carried a lot of ballast into the weekend and our pace has been pretty much identical all day.

“Qualifying 13th determined the way our raceday was going to turn out, because with everybody so close on times, it’s just impossible to come through the field, even when the weight drops off. The BMW was definitely fast in clear air though and I think if I’d got to the front, I could have had a real go. I was confident in race three when I got up to fourth off the line, but then I was hit, dropped a load of positions, and then the rain came and on slick tyres, we can’t compete against the front-wheel-drive cars in those conditions.”