Team Shredded Wheat Racing with Gallagher vows to fight back 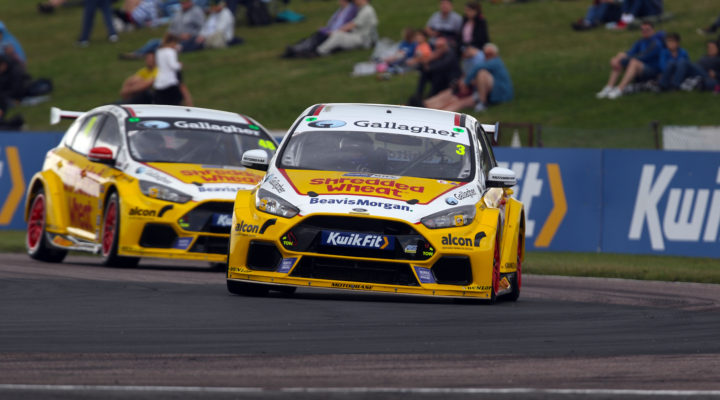 Mechanical issues, contact and qualifying woes put paid to the Motorbase-run squad’s podium hopes during the seventh BTCC meeting of the year. A gritty fight back, however, managed to salvage three points finishes from the squad’s misfortunes.

Struggling to unlock the full potential of the Focus RS during Saturday’s Free Practice and qualifying sessions, Tom Chilton and Ollie Jackson found themselves in 16th and 14th spots respectively for the first of Sunday’s three races.

Chilton’s hopes of recovery in race one were quickly dashed when the #3 Focus RS was forced to return to the pits on the green flag lap with a turbo issue, meaning the best result he could muster was 22nd having raced from the back of the pack. Contact picked up on the opening lap curtailed Jackson’s efforts, as he took the flag in 15th.

Aiming for the top-12 with the hopes of a favourable reversed-grid draw result in race three, Chilton recovered well to scrape his way up the field and into 12th.  Jackson, meanwhile, dropped back to 18th.

Just missing out on the reverse grid benefit, Chilton made a strong opening charge from 12th in the final contest. With the imminent threat of rain, the 34-year-old had caught up to the pack battling for sixth place with just three laps remaining.

As Jason Plato, Ash Sutton, Tom Ingram and Josh Cook all jostled for position and the heavens opened, Chilton he made a brave lunge round the outside as they charged into the complex.

Having almost completed the stunning move, the #3 Focus RS took a heavy hit from behind, resulting in a huge slide which forced Chilton into a dramatic save. In spite of his heroic efforts, the incident dropped him down the order, and he eventually crossed the line in 22nd.

Jackson’s consistent points-scoring efforts continued in race three, with the Alcon and Beavis Morgan-backed racer picking up his eighth points finish from the last nine rounds, taking 15th at the final flag.

Team Shredded Wheat Racing with Gallagher remains third in the Independent Teams’ standings and eighth overall ahead of the next race meeting at Knockhill. Tom Chilton currently sits 12thoverall and fourth in the Independents’ standings, with Ollie Jackson in 18th and ninth positions.

“That was a tough weekend,” said Team Manager Oly Collins. “We came to Thruxton with optimism and promise after recent weeks of testing and development with the Focus but we didn’t get it right when it mattered.

“Our pace in FP2 suggested we had the car in a place where we could qualify well which is so important round here. But when you qualify that far down in the BTCC it’s always going to be a big ask.

“On race day, any glimmer of hope sadly failed to come to anything. We need to learn from our failings this weekend in every area and make sure it doesn’t happen again. We have a great team and this weekend didn’t reflect that.”

Tom Chilton added: “Thruxton is still one of my favourite circuits, just not in a Ford Focus. We’ve moved forwards from when we last came here. I was fourth in FP2 and we made up another three-tenths in qualifying but it just wasn’t enough. Everyone else made up more. Sadly, qualifying where we did just put us on the back foot.

“To be honest, I was having a great last couple of races. We had a quick car in race three, were making up places and then it all bunched up at the chicane. I pulled a great move on Sutton as it started raining and then I just got a huge hit from behind that lifted my back wheel off the ground. That put me into a humongous backwards slide in fifth gear and ruined my race. I think we could have made top six or seven from there.

“Knockhill is next though. I won there last year in the wet. We know that the Focus goes well there as well. I’m hoping for a little more luck.”

“It’s been a challenging weekend again and we’ve not really been on top of it all weekend,” said Ollie Jackson. “We improved the car over the course of the day, but unfortunately so did the back half of the field. That’s what has hung us out to dry unfortunately. I think we’ve shown flashes of pace but we’ve not quite get a handle on it. Thruxton turned out to be a bogey track for us last time out and it’s been another one for us. At least we’ve come away with some more points.

“We’ve got three rounds coming up next that suit the focus and we’ve got to make hay while the sun shines. As long we can keep our noses clean, I think we can have three really strong meetings.”