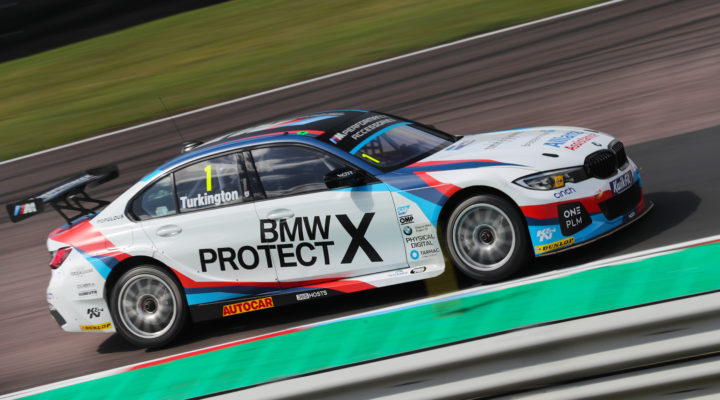 Team BMW’s Turkington and BMW Pirtek Racing stablemate Jordan head to Scotland sitting respectively first and second in the title table in the UK’s premier motorsport series, with an unrivalled five victories apiece from the opening 21 races of 2019. Both are former champions – Turkington in 2009, 2014 and 2018 and Jordan in 2013 – and both have a strong previous record at Knockhill, the only Scottish circuit on the BTCC calendar.

Turkington twice reached the rostrum there last year – two of 14 Knockhill podiums on his BTCC résumé – while Jordan converted fourth on the grid into victory in race two. The Midlander has promised maximum attack again as he bids to narrow the 30-point gap currently separating him from the summit of the Drivers’ standings.

Oliphant, meanwhile, achieved the best finish of his rookie campaign in the BTCC at Knockhill in 2018, and has multiple wins and podiums to his name at the Fife circuit in TOCA support series. With no extra ballast aboard his Team BMW 3 Series, the 29-year-old has a bumper points haul in his sights this weekend.

“I’m feeling excited, refreshed and ready for battle,” said Turkington. “I lived in Scotland for four years when I was at university in Stirling and did some instructing at Knockhill, so it’s somewhere I still have a lot of friends and I always enjoy going back. It feels like a ‘home’ circuit for me in that respect and it’s a mega track – not to mention a unique challenge. It’s nice to get stuck into something a bit different, and it definitely rewards bravery. We go there on the front foot and I’m feeling confident. Knockhill has generally been kind to rear wheel-drive cars, so it should be well-suited to the BMW 3 Series and I’m targeting a really strong points haul. As ever there, qualifying will be very important to set us up for a good weekend. The extra weight from leading the championship will hurt our acceleration coming out of the final hairpin onto the start/finish straight, but at the end of the day, that’s only a short section of the lap and hopefully the 3 Series’ strong handling characteristics will more than compensate. My overall mentality hasn’t changed. In the BTCC, you simply can’t afford to hold back in any way, shape or form, and I go into the weekend primed to attack.”

“I always look forward to going to Knockhill,” said Oliphant. “I’ve had a lot of success there in the past and it’s one of my favourite tracks on the BTCC calendar – very different to anywhere else we go. It’s fast, very flowing when you get it right and the undulation is quite incredible – and it’s a lot of fun driving it in a touring car. Knockhill has traditionally tended to favour rear wheel-drive cars, but the resurfacing work last year brought the front wheel-drive boys back into the equation a bit as it boosted their traction out of the last hairpin. In that respect, we don’t necessarily have the same advantage as we used to, particularly over a single lap, but whatever the weather decides to throw at us this weekend, I’m confident the BMW 3 Series will be competitive. Being 11th in the championship, I arrive carrying no extra weight, whereas most of the other rear wheel-drive cars in the field will have to contend with ballast, which makes quite a difference at Knockhill. That means I’m in a prime position to compete right up at the sharp end in qualifying – and hopefully from there, I can challenge for my first BTCC race win.”

“I think we should be strong at Knockhill,” said Jordan. “We’ve got weight in the car, which will have an effect with the circuit’s stop-start nature and uphill sections, but I’ve always been quick there and I’m confident we will be up at the sharp end. I’m not focussing massively on the championship fight at the moment, and I go there with the same approach I’ve had all season. At Knockhill, you have no choice but to simply grab the car and get on with it. I can’t afford to have a non-finish, but equally, I can’t afford to just drive round either – sometimes when you try to stay out of trouble, it can bite you so we’ve got to crack on. I’m going to Knockhill to race, and to race hard. I’m looking for wins and podiums. I’m not in a position to play the percentages – I need to get after Colin. He has a solid lead, but around Knockhill, things do tend to kick off. The BTCC has a habit of throwing up surprises, which means you can never take anything for granted. We took some points out of him at Thruxton, and we need to take even more this weekend. If I can get the gap down to 20 points or less, it will be game on and properly gloves off at Silverstone and Brands Hatch!”