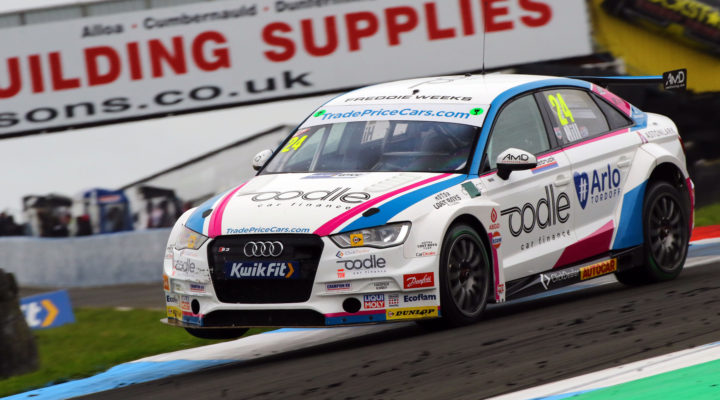 TradePriceCars.com’s Jake Hill has taken his first Kwik Fit British Touring Car Championship victory after producing a lights-to-flag display in the final encounter at Knockhill. Hill’s success was also the first for the Audi S3 in the BTCC as the Kent driver became the tenth different race winner in the 2019 season so far.

“It was a pleasure to have such a quick car beneath me,” said race winner Hill. “It was the first time I led for a restart in the BTCC. It’s the monkey off my back now and I wanted to win so badly. On the last lap I just misjudged it by a few millimetres and hit the gravel. I kept my foot in and held it!

“I can’t describe how good this result is for AmD and TradePriceCars.com. I’m overwhelmed. This win is for little Arlo Tordoff. I’m thinking of you Sam and Georgie.”

Hill drove commandingly throughout the race as he kept BTC Racing’s Josh Cook at arms length, whilst Mac Tools with Ciceley Racing’s Adam Morgan completed the podium positions after he got the better of Jason Plato.

Morgan’s Mercedes A Class and Plato’s Sterling Insurance with Power Maxed Racing Vauxhall had been inseparable for much of the day and the former eventually made his move stick through the chicane following an early restart. BTC Racing’s Chris Smiley followed suit as he grabbed fourth in the stealth grey Honda Civic Type R.

The title picture has been completely blown open on a dramatic day in Scotland as championship leader Colin Turkington spun out of the second contest, before BMW stablemate Andrew Jordan was forced into retirement in race three after collecting the spinning Subaru of Senna Proctor.

Turkington recovered brilliantly in the final bout to take tenth, leaving him with a ten point advantage in the standings over Jordan, with Cammish only a point further back.