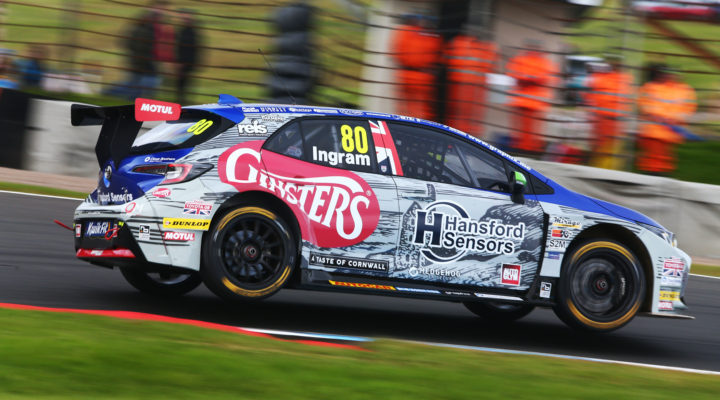 Tom Ingram is confident of being in the hunt at Silverstone this weekend for the penultimate event of the Kwik Fit British Touring Car Championship, as the Team Toyota GB with Ginsters star bids to extend his stellar recent record at the celebrated ‘Home of British Motor Racing’.

Ingram has won at Silverstone in each of the past three seasons behind the wheel of the Avensis, with three further podium finishes making him the championship’s highest average scorer around the Northants circuit since 2016.

The 26-year-old Bucks-born ace has also twice qualified on the front row of the grid there – on both occasions missing out on pole position by less than three thousandths-of-a-second – and similarly shone in the support series, with multiple victories in the Ginetta GT Supercup and Ginetta Junior Championship.

Ingram is now set to give Team Toyota GB with Ginsters’ new Corolla its Silverstone debut – the car already twice a winner in 2019, at Donington Park and Snetterton. The BTCC’s reigning two-time Independents’ Champion has high hopes of adding to his silverware collection this weekend, as he bids to continue climbing the Drivers’ standings from the sixth spot he currently occupies amongst the 31 high-calibre contenders in the UK’s premier motor racing series.

“We’ve obviously been very successful at Silverstone in recent years – I think our record speaks for itself – so we know what we need from the car round there,” said Team Principal, Christian Dick. “I have every confidence that we will be quick again this weekend and that the Corolla will be a really strong proposition from the get-go.

“After the nuances of Thruxton and Knockhill, it will be good to get back to a more conventional, Snetterton-esque circuit. Qualifying is increasingly important in the BTCC, and around such a short lap as Silverstone, you need to be absolutely inch-perfect if you want to secure a strong grid position – there’s no margin for error at all. That goes for the set-up and engineering side as much as the driver – it’s very easy to find yourself down the order if you don’t get everything together.

“Traffic will likely be a factor in qualifying, too, but conversely, there is time to be gained from slipstreaming and being in the tow – track position is a fine art there, and both tactics and Lady Luck often play a part. We will carry some weight into the weekend, but less than half what we had on-board at the same stage last year so that should play in our favour, and I would like to think we can come away again having extended our Silverstone podium run – at the very least.”

“I’m feeling excited,” said Ingram. “Looking at all the data, I think we should be pretty competitive at Silverstone. We’ve been fast there in previous seasons with the Avensis – a couple of years ago, we came close to scoring a podium in all three races, which is no mean feat when you consider the current level of competition in the BTCC – and I see no reason why we shouldn’t replicate that strong form with the Corolla.

“Silverstone’s National layout is a much bigger challenge than people sometimes give it credit for. You’re literally looking for thousandths-of-a-second, which is something I really enjoy – the pursuit of perfection. For that, you need to have a strong package underneath you, and we’ve always worked very hard to get the car hooked up well there, which has clearly paid off.

“The Corolla’s general balance should suit the track, and I think we will be in good shape this weekend. We’re understanding the car more all the time, and it seems to work well at more conventional circuits so we should be in the hunt. A good points haul would put us in the mix to fight for a top five championship finish at Brands Hatch, and that would be a fantastic result to cap the Corolla’s first season.”