Eyes on the prize for BMW’s title duellists 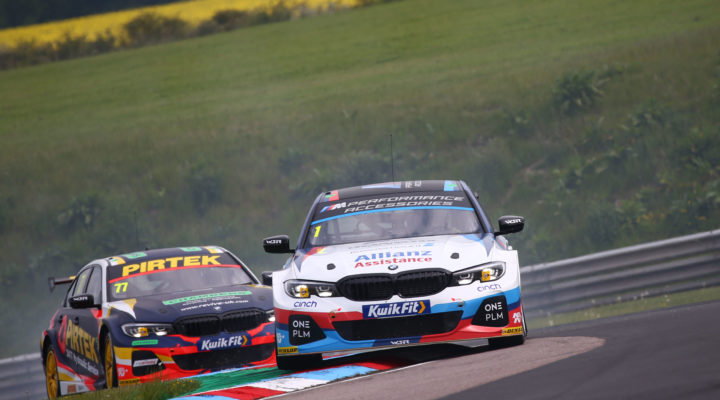 BMW’s title-chasing duo Colin Turkington and Andrew Jordan have both promised maximum attack when the Kwik Fit British Touring Car Championship speeds into Silverstone this weekend, as the nail-biting chase for the most coveted crown in national motorsport intensifies.

Team BMW’s Turkington and BMW Pirtek Racing’s Jordan have set the BTCC pace since Oulton Park back in June. Last time out at Knockhill, the pendulum swung one way and then back again on a dramatic day of action in Scotland, with both drivers encountering the slings and arrows of outrageous fortune after blamelessly finding themselves pitched off-track.

A victory – an unrivalled sixth of the season – and second-place finish for Jordan ultimately narrowed the gap at the summit of the Drivers’ standings to only ten points to long-time championship leader Turkington. That has set the scene for a battle royale over the final two race weekends, with the top three protagonists blanketed by just 11 points.

Turkington remains in charge heading to the ‘Home of British Motor Racing’, and the defending champion has 11 career BTCC podiums to his name at Silverstone. Both he and Jordan are former winners around the Northants circuit and have more silverware in their sights this weekend.

Tom Oliphant (Team BMW), meanwhile, twice took the chequered flag inside the points at Silverstone in his rookie BTCC campaign last year, and boasts multiple wins and rostrum finishes there in TOCA support series. The 29-year-old warmed up for the weekend by partnering Sebastian Söderberg to fourth place out of 18 teams in a Pro-Am tournament ahead of golf’s BMW PGA Championship at Wentworth; with the podium on his radar, he is looking to go at least one place better on the track.

All of the race day action will be broadcast live and in high-definition on ITV4 on Sunday, 29 September, beginning at 10:20am.

“Knockhill was a real rollercoaster ride,” said Turkington. “Through no fault of our own, we sacrificed a lot of points but we live to fight another day and I firmly believe that out of a setback arises the opportunity for a comeback. With that in mind, I’m very much looking forward to Silverstone. I had a really positive weekend there last year and we’ve been strong and able to hunt out good results everywhere we’ve been so far this year, so I’m feeling confident. The final couple of race weekends of the season are always a little bit different – the formbook tends to go out of the window and it’s a question of grinding out results, and that’s exactly what I intend to do. I’m not focussing on protecting my lead anymore – I’m going out there to properly attack and really enjoy the weekend, and in many respects, that is a simpler approach than keeping a constant eye in your mirrors. Every point will be crucial now and I’ve just got to go for it, which has always been the way I prefer to race. Even with the reduced ballast in the BTCC this year, I still expect qualifying to be tough because the whole grid has tightened up. The extra weight will certainly hurt and shuffle the pack, but my job is to deliver the best lap time I can and then move forward in all three races.”

“I’m definitely fired-up for Silverstone,” said Oliphant. “The car felt mega at Knockhill, and I set fastest lap in two of the three races which proved our pace but Lady Luck just wasn’t on our side. Moving forward, I think Silverstone will be a good track for us, and the 3 Series’ dynamics should suit it a bit more than the 1 Series did. It’s a completely different challenge to Knockhill; that was all about throwing the car about, whereas you need to be very precise around Silverstone’s National circuit and can’t really afford to make mistakes. Qualifying well will be important; that’s something I’ve learnt in the BTCC this year, that with everybody so closely-matched, if you want to race at the front you need to start towards the front. With no weight in my car, I really need to make the most of that. I’ve always gone well there and scored a couple of good results last year, and I think we stand a good chance of featuring right up at the front this weekend. I really want to challenge for my first win. I feel like I’ve shown glimpses of what I can do, but it’s not all come together yet. With just Silverstone and Brands GP now left on the schedule in 2019, I’m looking forward to signing off the season on a high.”

“We’re in a proper fight now – it’s game on!” said Jordan. “Up to this stage, I’ve been playing catch-up. I’ve had six non-scores this year compared to just two for Colin – without that, we would be leading the championship but that’s the way it goes sometimes in racing. Knockhill was the first time since before Donington Park that I thought, ‘I can win this, I can 100 per cent win this’. To take 20 points out of Colin’s championship lead was great. The momentum is firmly on our side, and hopefully we can build upon that at Silverstone. When you look at how well we went there last year with weight on-board, I think we have reason to feel confident. It’s obviously very serious because there’s a championship at stake, but I’ve been in this position before and am feeling very chilled about it all. I’ve got a lot of respect for both my main rivals, and it’s certainly going to be an exciting battle for the fans and for us as drivers. I can’t wait! I go to Silverstone aiming to win races. Second or third in the championship simply doesn’t interest me – my sole focus is the title.”