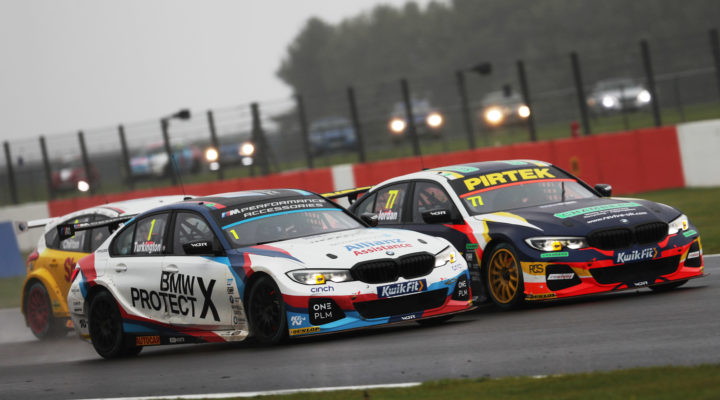 It’s advantage Colin Turkington in the race for the 2019 Kwik Fit British Touring Car Championship after the Team BMW star got the better of his title rivals on a sensational rain-affected day at Silverstone.

A double win for Tom Ingram around the 1.64-mile National Circuit confirmed the Team Toyota GB with Ginsters star as the fifth and final title contender before the series moves to its season finale at Brands Hatch in two weeks’ time.

There was a fantastic underdog story at Silverstone too, as Jack Goff secured the first ever BTCC victory for Kent-based Team HARD.

The day began with Ingram claiming his third and fourth wins for the new-for-2019 Toyota Corolla, as the 26-year-old reignited his championship challenge.

Ingram snatched the lead away from pole-sitter Jason Plato in the opening race, as the Sterling Insurance with Power Maxed Racing driver continues to search for his first win of the season.

The Vauxhall Astra of Plato dominated the early proceedings in greasy conditions, but the Toyota Corolla of Ingram soon had the double champion in his sights.

Plato and Ingram rubbed paintwork on lap four before last year’s championship runner-up got the job done through Luffield to take the win.

Manufacturer-backed Ingram then doubled up, having reclaimed the lead during a dramatic yet shortened Race 2.

Team Toyota GB with Ginsters’ Ingram led from the outset before contact with Plato’s Vauxhall Astra let the BMW of Tom Oliphant nip by both of them and into first.

Mid-race rain left the field running on slick Dunlop tyres in treacherous conditions, and the safety car was soon called for after the Mercedes A-Class of Adam Morgan spiralled into the gravel and out of the race.

Oliphant’s BMW 3 Series twitched wide on the exit of the first corner at the restart and he was soon shuffled down the order, as Ingram swept into an unassailable lead.

Plato was another who fell away late on, but the same couldn’t be said for the charging title contenders of Turkington and Cammish. Team BMW’s Turkington surged from 14th to second, whilst Halfords Yuasa Racing’s Cammish came from 11th to third.

With the rain worsening every lap, a decision was made to red flag the remainder of the contest.

Goff then grabbed the headlines in a dramatic wet/dry finale at the famous Northamptonshire circuit.

The likes of Cook and Cammish led the way early on and were seemingly strengthening their title credentials, but that all changed when a safety car was called for after the Honda of Matt Simpson spun into retirement.

A number of drivers then chose to switch to wet tyres during the safety car period, and it proved to be a masterstroke as the conditions worsened considerably.

RCIB Insurance with Fox Transport’s Goff and Laser Tools Racing’s Aiden Moffat were the first to surge through the field and it would quickly become a two-way fight for victory. It was either going to be a first for Team HARD or a first ever win for the Infiniti Q50, and the moment of truth came shortly after the duo hit the front.

When the rain clouds eventually drifted away at Silverstone it was Turkington who had enjoyed the better of the day in terms of the title contenders; 14th second and seventh place finishes wouldn’t normally represent a particularly outstanding weekend for the three time champion, but his points return on a dramatic day saw him extend his advantage over the chasing pack.

So, the race for one of the most coveted prizes in motor racing will be decided on the final day of the season at Brands Hatch on 12/13 October, where one of Turkington, Cammish, Jordan, Cook or Ingram will be crowned the 2019 Kwik Fit British Touring Car Champion.

Colin Turkington said: “I’ve drank a lot of coffee today! We’ve been through every scenario on the track in terms of tyres. We’ve been fast all weekend. It’s been the most challenging weekend of the season to-date and we’ve come out in good shape. I didn’t give up after race one and I’ve fought back and scored good points. I’m pleased with my performance and I feel like I’m leaving in a good place. The key is going to Brands with a chance and that’s the position I’m in. You only have to watch one race day to see how unpredictable the BTCC is. It’s the pinnacle of UK motorsport. It’s top level touring car racing across the world. When you win this championship, you get the messages through and you realise just how many people are watching around the world. I’ll continue to work harder and I’m going to give it absolutely everything.”

Andrew Jordan said: “It’s been a full-on day for the drivers and the guys and girls in the team. To have Colin (Turkington) extend his lead isn’t ideal but we’re still in touch on a day when it could have ended in tears for any of us so we should be happy with that. We’ll go to Brands Hatch ready to fight, recharged and refreshed. If I were stood on the outside, I’d want to see a bit of fire from people and as a spectator, that’s what makes it. You can agree and disagree with views and that’s the way it is. We’re not here to make friends, we’re here to win championships. If emotions boil over or whatever, that’s all part of it. I’ve not really got much to plan. All I’m going to do is go there and drive the car quickly and win some races. I’d love to win it.”

Dan Cammish said: “It’s been a really tough weekend for everyone. It was getting desperate out there for a few people and I’m just going about my business. Those laps in those conditions could have been the ones that make the difference, so you have to give it everything. A few things didn’t go my way like the red flag 100 metres before the line, where I would have gained second. It cost me six points. I feel deflated but I’ll pick my head up, drive the wheels off the thing and go for it. It’s not a million miles away, 16 points. If you’d said that in the middle of the season, I wouldn’t have believed you. The team have done great, I’ve been consistent and we’ve put up a fight. The BMW is the fastest thing out there when it’s like for like – they’ve done a fantastic job. They’re still scrabbling around though, trying to get the job done. I’ll keep hanging in there and make myself a nuisance.”

Josh Cook said: “The gap’s 36 points, which is frustrating but leaves me with a bit of an outside chance. I’ll be getting my elbows out like everybody else has this weekend. My eyes are solely on the Drivers’ standings at the minute. I know the team are keeping their eyes on the Independent Teams’ and Independent Drivers’ championships but I think we’re doing okay overall. We’ve seen what happened today with Tom Ingram getting two wins. I’m not just a mathematical option at the minute. I’m still in with a good shout. We’d have to have a stonking weekend and rely on others having a bit of bad luck but we’ve got two cars in this team that went well around Brands last year, so we’ve got to make the most of it. It’s going to be one hell of a showdown.”

Tom Ingram said: “It was fantastic. I’m really pleased as I love those conditions! What we’ve found with the Corolla is that on the faster circuits it’s just so, so good. We keep making such massive changes between events. We find things that really work and refine those. It’s never going to be a five-minute process. It was really enjoyable, and what a massive achievement for the team. I was happy to keep going. It’s nice in that situation with the drivers battling to see who’s bravest.”

Jack Goff said: “It started to sprinkle on the out-lap of race three and we made the call. It means so much to me, my family, our sponsors and the team. I couldn’t see anything. My windscreen completely steamed up with ten laps to go and I was driving through a little clear spot in the corner. It was so tricky. It’s unreal. I won my first podium with this team at Brands Hatch in 2013. It means so much for all of them. Things haven’t gone our way this year so I’m chuffed to bits.”

General:
Team Parker Racing was penalised by the deduction of 10 points in the Teams’ and Independent Teams’ standings due to an engine change

Race 1:
Aiden Moffat was officially reprimanded and had his licence endorsed by the addition of two penalty points for an incident involving Bobby Thompson

Andrew Jordan was penalised by the addition of 6.6 seconds to his race time for gaining an unfair advantage in an incident involving Tom Chilton. This was appealed by BMW Pirtek Racing and the appeal was rejected

Race 2:
Dan Cammish was fined £1,500 and had his licence endorsed by the addition of three penalty points for an incident involving Andrew Jordan under safety car conditions. This was appealed by BMW Pirtek Racing and the appeal was upheld and Dan Cammish received a verbal warning for overtaking under yellow flag conditions

There are four incidents that will be investigated prior to Brands Hatch involving Chris Smiley and Jason Plato, Jason Plato and Adam Morgan, Andrew Jordan and Matt Simpson, Rob Collard and Stephen Jelley