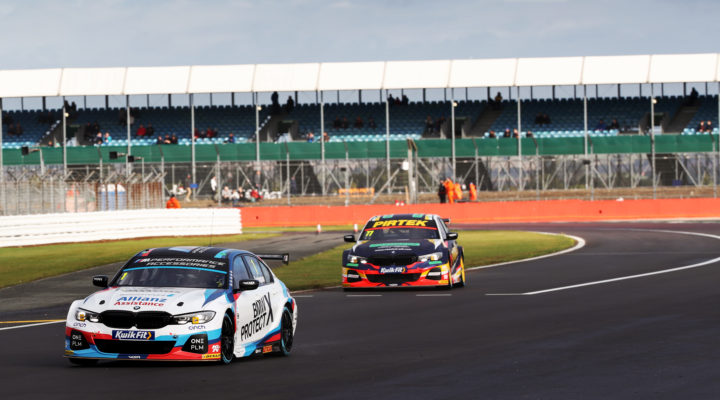 Colin Turkington and Andrew Jordan will go into the 2019 Kwik Fit British Touring Car Championship season finale as two of the leading contenders for the most coveted crown in UK motorsport, after surviving the slings and arrows on a dramatic day of racing at Silverstone on Sunday 29 September.

With the title battle reaching fever pitch at the ‘Home of British Motor Racing’, qualifying was always going to be a tight and tense affair. Tom Oliphant led the Bavarian charge in fifth position behind the wheel of his BMW 330i M Sport, while Turkington pulled a superb lap out of the bag on maximum success ballast to line up alongside his Team BMW stablemate in sixth. Although he was only two tenths-of-a-second further adrift, that was enough to relegate BMW Pirtek Racing’s Jordan to 14th on the closely-contested, 30-car grid.

Race day was characterised by changeable conditions. Oliphant held position in the opener to take the chequered flag fifth on a greasy track, as Jordan scythed his way through into the top ten. Turkington, meanwhile, found himself tagged into a 360-degree spin that dropped him all the way down the order to 25th, but demonstrating his class, the defending champion produced an excellent recovery to 14th at the chequered flag to salvage two potentially crucial points.

The Northern Irishman was one of the undisputed stars of race two, as he picked his rivals off one-by-one. He had climbed to second – setting an incredible fastest lap along the way, well out of reach of what anybody else could muster – when the action was red-flagged on safety grounds with four laps left to run due to deteriorating conditions as the rain intensified.

On the less favourable medium-compound tyres, Oliphant similarly went on a charge. After making his way up to third, the second-year BTCC driver rapidly latched onto the back of the leading pair and seized the initiative when they made contact on lap ten.

The 29-year-old maintained his advantage in the worsening weather, but a late safety car intervention for a car beached in the gravel would unfortunately prove to be his undoing. At the re-start, Oliphant was the first to test the grip on cooler tyres, and after running wide through Copse Corner, he eventually wound up seventh, one spot ahead of Jordan in eighth.

Further light rain made for a slippery circuit once again in the last race of the day, and all three drivers elected to pit to change over to wet weather rubber during an early safety car period. Rejoining in 18th (Oliphant), 19th (Jordan) and 21st (Turkington) – all more than 40 seconds shy of the lead – they went on to fairly carve their way through the slick-shod runners, with Turkington and Jordan even indulging in an entertaining side-by-side scrap along the way.

Oliphant ultimately crossed the finish line an excellent fourth to cap a very consistent day in distinctly inconsistent conditions, with his trio of results seeing him close to just 11 points adrift of the lead in the chase for the 2019 Jack Sears Trophy. Turkington took the flag seventh with Jordan eighth, meaning the pair head to Brands Hatch in a fortnight’s time sitting first and third in the Drivers’ standings respectively, only 17 points apart as the final showdown speeds into sight.

“That was definitely the most challenging weekend of the season so far,” said Turkington. “I’m pleased with my performance – we qualified and raced strongly, although all the effort in qualifying was wasted a little in race one when I ended up facing the traffic! The day looked like it was heading the wrong way after that, but we didn’t give up, dug deep and worked our strategy well to turn it around. Race two was the first time all weekend that we ran with the weight taken out and the BMW 3 Series just came alive – we knew we had a fast car here, but when you start off heavy, you can’t always show that straightaway. With the soft tyres, we could really crack on, and to go from 14th to second was a great result for the championship. The last few laps in the wet were really tricky and the main objective was simply to stay on the road. In race three, it got to the stage where the slicks were literally not generating any grip and I was no longer confident on them, so there was no choice but to change tyres. We had a good old ding-ding battle with Andrew, and overall, it was a tough day’s work but a good day’s work. Most importantly, we came away with a decent haul of points and extended our championship lead – and now it all goes down to Brands Hatch.”

“I’ve got to be happy with my weekend,” said Oliphant. “In tricky conditions not really suited to our car, I can’t complain about a fourth, fifth and seventh place and leading my first laps in the BTCC. Part of me is admittedly disappointed that we didn’t ultimately win race two – that was a tough one to swallow. We moved forward in the dry and then when the rain started falling, I pressurised the people in front of me into mistakes and ended up in the lead. We stayed in front even as the rain got heavier, but we lost tyre temperature behind the safety car and then had absolutely zero grip at the re-start, which caused me to run wide. Front wheel-drive cars on soft tyres have a real advantage in those conditions, and I was grateful they red-flagged it after three laps – even though that was obviously three laps too late for me. The team made a few small changes before the last race and the car felt mega. We made the right call on tyres, and the guys did a great job to get me back out of the pits second amongst the drivers on wets, which set us up for a charge. The Jack Sears Trophy was my main pre-season aim, and this is the first time I’ve genuinely felt I’ve got a chance of winning it since Donington Park – so bring on Brands Hatch!”

“It’s been a tough weekend,” said Jordan. “But I think to fight back from where we were in qualifying to where we finished in the races represented a pretty solid job. It was full-on and stressful the whole way through for everybody involved, and the kind of conditions in which it would have been very easy to throw it all away. Colin extending his championship lead clearly isn’t ideal for me, but we’re still in touch after a day that could have ended in tears for any of us. It was good fun on the track, and I’m sure it made for some entertaining action for the spectators. The second race got really tricky towards the end – I really could have done with a set of softs in that one! Rear wheel-drive cars notoriously struggle on slick tyres on a damp track, so it was all about bringing it safely home and scoring some points. I can imagine it got a bit tense for the team in race three. You obviously try to give your team-mate a bit more room than you would other drivers, but at the end of the day there’s a championship at stake here, so I have to race Colin as hard as I race anybody else and I know he will do exactly the same. Now it’s time to recharge my batteries ahead of Brands Hatch and get ready to go again.”