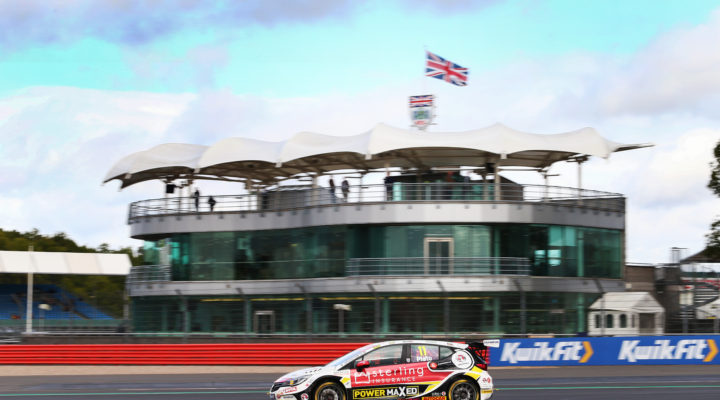 Sterling Insurance with Power Maxed Racing returned to action at Silverstone for Rounds 25, 26 and 27 of the Kwik Fit British Touring Car Championship, the penultimate event of the 2019 season.

The high-speed sweeps and facilities of Silverstone contrast dramatically with the tight and rustic Knockhill and presents the PMR engineers a completely different set of challenges.

The blustery but dry conditions from Free Practice persisted into Qualifying, with hopes high in the PMR garage that both cars could be up at the front. All eyes were on car #11 as Jason Plato hovered around the top-five. Into the last eight minutes and the former double Champion hit the top of the times, holding on to win a superb Pole Position with a new Lap Record.

With the first 28 cars covered by less than a second, every tenth was critical and Rob Collard started to struggle a little with the balance of his Astra, setting his quickest time mid-session but failing to improve thereafter to end up a frustrated P17, with work to do.

Race day dawned very wet, but the wind and sun started to dry the track and brought the Dunlop slicks back into play. Along with the majority, both drivers decided to take the softer Option tyre for race one.

A great start saw Plato burst into the lead on the greasy track, crossing the line at the end of lap two ahead by 1.5 seconds. Collard also made a great getaway, fighting through to P14. By lap four however, the lead Sterling Insurance with Power Maxed Racing Vauxhall Astra was in a dog fight with the hard tyre shod Ingram, losing the advantage on the right out of Copse after running side by side from the exit of the long Luffield hairpin.

From then on, Plato hovered close by in second, well ahead of the pursuing pack, before settling for the place after experiencing a vibration on the front left of his Astra.

In the #9 Vauxhall Astra, Collard had also made a great start, immediately gaining four places over the first couple of laps and then surviving a scare when Turkington spun across his bows, with Morgan on the inside, as the three cars exited Luffield.

By lap 20 Collard was in a four-way dice fighting over P10 and lapping within 1/10th of the leaders. Unfortunately, in challenging for P10, he was pushed wide and then off the track, losing out on the race to the line to finish P12 after a racy and combative drive.

Race two was greeted by a dry track, and a delayed start just added to the tension. Both drivers again made good starts, with Collard cutting inside Chilton on the run out of Luffield to move into P11 and then inside Bushell with a lovely move into Brooklands on lap two.

It got worse unfortunately on lap four as damage caused by contact resulted in Collard returning to the pits. The PMR crew effected repairs and sent the #9 car out to check systems, eventually finishing seven laps down.

At the front Plato was also in the thick of the action, closing on P2 before dropping back at the rain started to gently fall. By lap 9, the top three were together as the slippery track caused drama with cars sliding everywhere. All three leaders slid into Brooklands, with Plato also losing out to Turkington as they scrambled their way through Luffield a lap later.

By lap 14 the Safety Car had been deployed, with the field closed up and all on slicks on the now very wet surface, the spectators held their breath for the lap 17 restart.

Immediately Plato slid down the inside of Oliphant into P3, only to lose out again with a big slide at Copse before the race was red-flagged because of the conditions. The P4 finish also meant that Plato dropped out of the title race, now with no mathematical chance of a third drivers crown as BTCC heads to the season finale at Brand Hatch.

The clouds looked ominous for race three, and although all drivers started on slicks, the team’s weather radar was being closely monitored.

Another great start by both cars saw Plato move to P7, then P6 and then P5 down the inside of Smiley into Becketts, whilst at the tail Collard was making great progress, already up five places in two laps.

As the field went into lap three, just as the Safety Car returned, Plato dived into the pits for wets, dropping to P20 but more importantly over 30 seconds behind leaders, but still on the lead lap come the restart.

Collard meanwhile had continued his mission, expertly moving up to P11, still on slicks and facing a challenging 15 laps ahead.

As the track got wetter and wetter, he tried to fight the tide, still lapping in the 66 second mark to hang on in the Top-15 but then starting haemorrhaging places as the slick/wet cross over took full effect in the ever-worsening conditions.

By lap 13 Collard was still in P12 and Plato, accompanied by a few wet shod buddies, was remorselessly closing in. On lap 14, car #11 crossed the line in P12 and car #9 was P14 before dropping to an eventual P21.

Plato kept catching the leaders and with Turkington in tow moved into P10 on lap 20, P8 on lap 21 and then into a great sixth place finish by the end of the 25-lap race.

“I can’t wait to have a beer when I get home!” said Collard. “Another really frustrating weekend really, and I’m really disappointed after race two’s incident. We battled back hard, but we were on the wrong tyre and just hasn’t come our way. Looking forward to a strong Brands Hatch and a rest over the winter.”

“In hindsight,” said Plato, “in race three, as I passed the pit entrance, I hadn’t made my mind up on tyres, and saw the shine on the track and wished I’d come in! Had a great start, but then the Smiley incident just messed it all up completely. It’s been a positive day though, but I’m never happy with the results I get, and always want more. I’m hopeful we can catch that elusive win at Brands!”

“It’s been another frustrating but positive weekend overall,” said Team Principal, Adam Weaver. “It’s annoying that we didn’t take the win in race one, but we’ve bagged some decent points and head into the final holding our own.”