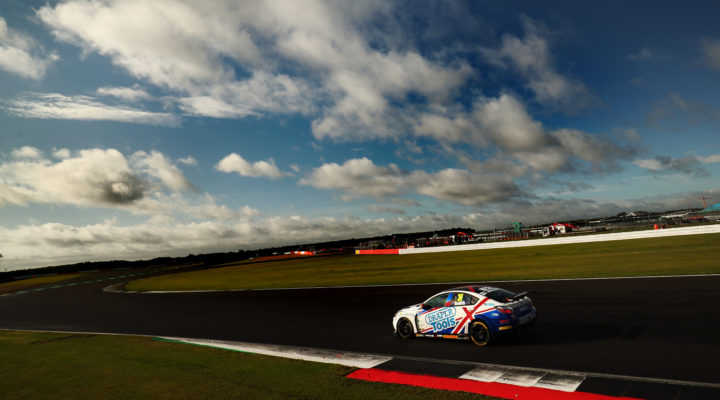 Touring car rookie Smith, who has shown considerable progress during his maiden campaign in the UK’s premier championship, made a wise call to change from slicks to treaded Dunlop tyres part way through the final race of the weekend.

Driving well in increasingly miserable conditions, the Telford racer was able to charge through to 14th position overall – easily his best result yet in the BTCC – and eighth in the Independents’ Trophy at the wheel of his MG6.

Notably too, his fastest lap a mere tenth of a second shy of the best managed by outright top three finisher Matt Neal, in his manufacturer entered Honda Civic, and the second placed Infiniti of Aiden Moffat.

“It’s great to get the monkey off my back and take our first outright points in the BTCC, I’m really pleased with the pace we showed in the final race”, said Smith. “The conditions were changing a lot all the time, it was difficult to know who was on slicks and who was on wets as the guys on slicks were doing a good job to be fair.

“Our car was working well considering we had a dry set-up, if we’d pitted a lap sooner it would’ve been a masterstroke and we could easily have been in the top 10 and higher. All in all I’m still lacking seat time in the wet, so I’m a bit more cautious than I naturally would be, but the points are great and it’s a good way to cap what was, until then, a bit of a frustrating weekend.”

Qualifying saw Smith post a best time of 58.565 seconds (100.83mph) which resulted in a frustrating 29th overall on the grid, 19th in the Independents Trophy.

For race one on Sunday, intermittent rain gave some pause for thought with regard to tyre choice but Smith opted for slicks. Slipping back a place on the opening tour, at Becketts he got ahead of two tangling cars to move into 28th.

At the back of a nine car train running pretty much bumper-to-bumper, Smith continued to improve his pace, moving through the pack up to 23rd before a recovering Colin Turkington passed him on lap 11.

Making the breakthrough on lap 19 to take 22nd and 14th in the Independents, he held the placing to the flag on lap 22.

For the fully dry second race, from 22nd on the grid, Smith safely negotiated the first lap but was edged back to 24th place. Dropping two further places on the second tour, Smith quickly regained the lost ground but the message then came over the pit-to-car radio he would have to serve a drive through penalty due to a false start.

Pitting at the end of lap six, Smith rejoined the race in 26th overall just as rain started to fall. With the precipitation worsening with every lap, a number of cars came to grief and officials opted to deploy the Safety Car on lap 15 as a result with Smith holding an elevated 21st position. He pitted again to gamble on wets, but officials then red flagged the race with Smith 22nd and 14th in class.

Starting 22nd on the grid again for race three, Smith ran the soft compound Dunlop slicks with drizzle starting to fall again and he climbed into the overall top 20 before being bundled back to 26th prior to the emergence of the Safety Car on lap four.

As some drivers opted to pit to change to treaded rubber with the rain worsening, Smith weighed-up the idea himself and a lap later he chose to take the gamble. Managing to leave the pits still on the lead lap, Smith held 22nd overall and 14th in the Independents and while big gains weren’t initially forthcoming, into the final third of the 25 lap encounter he began to slice through the order.

By lap 24 the Excelr8 driver had broken into the overall points-paying top 15 and a superb ninth in class and on the final tour he gained one more place, both outright and in the Independents, to secure a very well deserved and impressive 14th overall and eighth in class.

“As usual in FP1 I was reasonably happy, but when we used new tyres in FP2 there was too much understeer so we had to work on that”, reflected Smith. “I was pleased to make a breakthrough with the driving style though, when we looked at the data after practice there were no changes needed and obviously race three was just the end we wanted. Hopefully we can take this on to Brands.”