Road to the Final: The Contenders 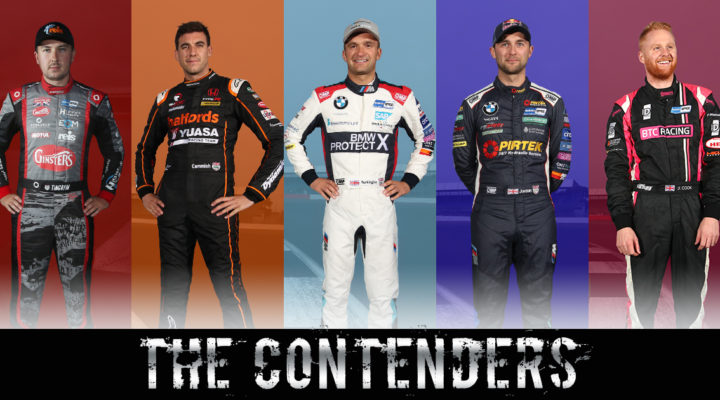 The 2019 Kwik Fit British Touring Car Championship will go down to the wire at Brands Hatch next weekend (12/13 October), with no fewer than five title contenders aiming to win the most coveted prize in British motorsport.

A huge crowd is expected to descend on the famous Kent venue as motor racing’s most gripping and unmissable drama is played out on the legendary Grand Prix circuit.

Tens of thousands of fans will enjoy the action trackside, whilst many more will be glued to live and exclusive television coverage on ITV4 throughout race day.

The Contenders
Reigning champion Colin Turkington has led the way for much of the campaign, but the Team BMW star has seen his mid-season advantage reduced to just 16 points ahead of the Brands GP finale.

Turkington is aiming to become a record-equalling four-time BTCC champion next weekend – a feat only previously accomplished by tin-top legend Andy Rouse – but the Northern Irishman will have to fend off attacks from a team-mate and a gaggle of rivals.

The 37-year-old claimed five wins from the opening six events of the season but recent race weekends at Thruxton, Knockhill and Silverstone have been more damage limitation rather than all-out attack.

Turkington’s points advantage was down to just four points after the opening race at Silverstone last time out, but the BMW 3 Series driver bounced back brilliantly thereafter to grab a podium and eke out the gap to a slightly more comfortable 16 points.

“The key is going to Brands with a chance, and that’s the position I’m in,” said Turkington. “You only have to watch one race day to see how unpredictable the BTCC is. You scrap as hard for second place as you do for 20th. It’s positive that I go with some points tucked away, but we need to be on the case at Brands. It’s the last step and I’m looking forward to the challenge.

“It’s a completely different race weekend to any other. The focus on the drivers is huge and there’s a lot at stake, but I know how to approach it – you learn year-by-year. The first title is the hardest to get over the line. It doesn’t get any easier but you’ve a greater bank of knowledge to rely on and you bat away the negative thoughts a bit easier.

“Brands GP is the perfect track for a finale. It’s one we all love and it’s got everything – fast corners like Paddock and Hawthorns out the back and the rest is a perfect mix. We should have a strong package there. Qualifying will be tough I think, but I’ll put my best foot forward and try to enjoy the weekend as well. We’ve got to seize the moment.

“I go out hunting number four. It’s a nice target to aim for but I fully expect it to be a tough ride. I’ll continue to work harder and I’m going to give it absolutely everything.”

With 67 points remaining on offer, however, the chasing quartet will still fancy their respective chances of snatching the title.

The rise of Halfords Yuasa Racing’s Dan Cammish has been one of the stories of the 2019 BTCC season, following the Honda star’s sluggish start in the opening events at Brands Hatch and Donington Park.

As low as 18th in the standings after the curtain-raiser, Cammish had improved to sixth overall by mid-campaign. A run of 11 podiums in 17 races continued to catapult the Yorkshireman up the order, and he’s now Turkington’s nearest challenger ahead of the final showdown.

“It’s not a million miles away, 16 points,” said Cammish. “If you’d said that in the middle of the season, I wouldn’t have believed you. The team have been great, I’ve been consistent and we’ve put up a fight.

“The BMW is the fastest thing out there when it’s like-for-like – they’ve done a fantastic job. They’re still scrabbling around though, trying to get the job done. I’ll keep hanging in there and make myself a nuisance.”

BMW Pirtek Racing’s Andrew Jordan has won six races so far in 2019 – more than any other driver in Britain’s premier motorsport series this year – and he’s currently just a point adrift of Cammish.

His speed behind the wheel of the new-for-2019 BMW 3 Series has been there for all to see, and the 30-year-old has produced some of the finest drives of his career to-date.

Carrying less success ballast into the season finale than his nearest rivals, many a pundit believes this could be Jordan’s year as he bids to claim his second BTCC crown.

“Brands GP is a fantastic track, and finals day is always very atmospheric with a great crowd and great racing,” enthused Jordan. “It’s a fitting place for it and I’d love to win it.”

BTC Racing’s Josh Cook has been within touching distance of the standings summit for much of 2019, having led the championship early on. Consistency has been relatively key to Cook’s challenge, although a mid-season wobble arguably cost him overall.

Cook has been in fine form during recent weeks, however, and the Honda Civic Type R man will be ready to pounce if the leading trio slip up at Brands Hatch.

Tom Ingram and his Speedworks Motorsport squad have enjoyed a series of stellar campaigns in the BTCC, and 2019 has seen the outfit reach further milestones.

The Team Toyota GB with Ginsters star has been manufacturer-backed for the first time in his career, and the talented Bucks ace has claimed four victories in the all-new Corolla. Top results have not always been easy to come by at different points during the season, but the 26-year-old arrives at Brands Hatch in title contention for the third successive year.

Whilst the overall Drivers’ champion will be the main headline-grabber, there are a host of other battles and sideshows going on up and down the order.

BMW and Honda will fight it our for Manufacturers’ and Teams’ supremacy whilst Cook, Rory Butcher and their respective teams are challenging for Independents’ honours.

Butcher will be looking to secure the Jack Sears Trophy too, but BMW’s Tom Oliphant is closing in.

BTCC heroes Jason Plato and Matt Neal will be keen to join the party as the veteran racers both chase their first victory of 2019, whilst local lights from Motorbase, Team HARD and AmD will also be eager to end the season on a high.

Timetable and Tickets
Aside from the BTCC showdown, a spectacular line-up of support series will complement the action at Brands Hatch, with a range of racing disciplines set to entertain the expected huge crowds.

Tickets for the Kwik Fit British Touring Car Championship finale at Brands Hatch on Sunday 13 October are available from £28 in advance, with FREE entry for under-13s. Click here or call 0843 453 9000 to book now.