Jordan gunning for glory as Pirtek Racing bows out 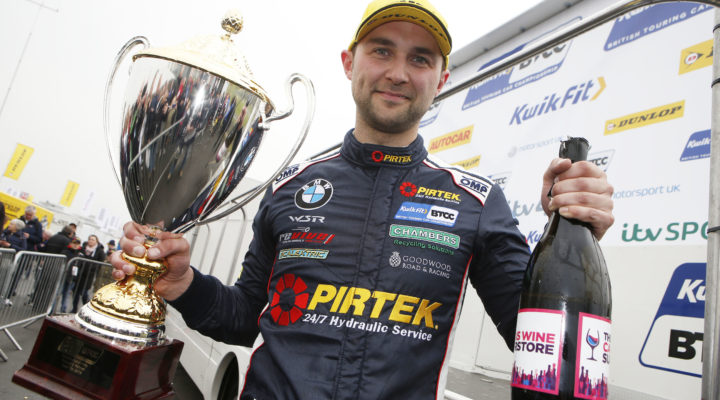 BMW Pirtek Racing’s Andrew Jordan will seek to end his Kwik Fit British Touring Car Championship campaign on the ultimate high this weekend when the 2019 season draws to a close at Brands Hatch.

Jordan heads into the weekend sitting third in the championship standings on the back of a challenging weekend at Silverstone last time, where mixed weather conditions led to another twist in the fight for the title.

However, Jordan lies just 17 points behind fellow West Surrey Racing driver Colin Turkington with a maximum of 67 still available, and will carry less success ballast into the season finale than at Silverstone two weeks ago.

Having enjoyed success around the famous Brands Hatch Grand Prix circuit in the past, Jordan heads into the weekend confident about his chances of adding to his 2013 title win.

It would cap a remarkable comeback from what was a challenging start to the year for the 30-year-old at the wheel of his new BMW 330i M Sport.

Having secured a dream victory first time out in the car at Brands Hatch in April, Jordan then endured a weekend to forget at Donington Park, where an accident ruled him out of all three races and left him playing catch-up in the standings.

Since then, the #77 driver has gone on to win more races and lead more laps than anyone else to roar back into contention, with his focus firmly on lifting the title for a second time.

Jordan will also be looking to help BMW win the Manufacturers’ title for a fourth successive season.

“Since Donington Park, I’ve pushed hard to get back into contention for the title and we now go to Brands Hatch with a chance of lifting the championship,” he said. “It won’t be easy by any means, but history shows that anything can happen when it comes to the final weekend of the season and it certainly isn’t over.

“Brands Hatch is a fantastic circuit on which to hold the final round and always delivers drama. It’s a circuit where I think the BMW will be strong, and when things are as close as they are, the fact that I’ll be carrying a little bit less ballast will hopefully work in my favour.

“My aim is to try and qualify well so that I’m out of the ‘danger zone’ on race day, and then I’ll be giving my all to fight for wins and as many points as possible; that’s all I can do.”

Regardless of the final outcome of the championship battle, this weekend’s season finale will make the end of an era for Jordan and Pirtek Racing as the curtain comes down on one of the most successful partnerships in BTCC history.

Pirtek first joined the grid with Andrew’s father Mike back in 2006, and have been title sponsor of Andrew’s touring car programme since 2010.

In total, Pirtek-backed drivers have gone on to appear in more than 400 BTCC races, with 27 race wins, more than 80 podiums and four championship titles.

“When our relationship with Pirtek first started, none of us could have expected it to become the long-term partnership that it has been,” Jordan said. “I’m hugely proud of the success that we have enjoyed together through the years and I’m looking forward to taking to the track in Pirtek colours one final time this weekend.

“It would be a fitting way for us to end our time together with another championship and I’ll be doing everything I can to try and make it happen.”

Pirtek Racing in the BTCC: