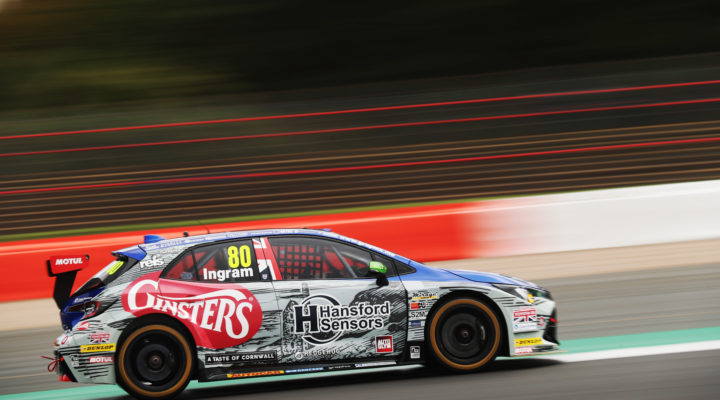 For the third consecutive year, Tom Ingram will enter the Kwik Fit British Touring Car Championship finale still in contention for the biggest prize in UK motorsport – and though he acknowledges he is a ‘rank outsider’, the Team Toyota GB with Ginsters star has nonetheless promised ‘full-on attack’ at Brands Hatch this weekend.

This season marks the first for the new, British-built Toyota Corolla in the nation’s premier and most fiercely-disputed motor racing series, but in Ingram’s hands, the Speedworks Motorsport-honed hatch has repeatedly proved its potential. The highly-rated Bucks-born ace has scored points 25 times from 27 starts to-date, including four victories – two of which came during a dominant display at Silverstone last time out.

Heading to Brands Hatch, Ingram sits fifth in the Drivers’ standings amongst the 32 high-calibre protagonists – one of a quintet of contenders still in the mix for outright glory. What’s more, the 26-year-old has twice reached the rostrum and eight times taken the chequered flag inside the top six around the Kent venue’s legendary ‘GP’ layout – home to Formula 1’s British Grand Prix on 12 occasions between 1964 and 1986.

As he prepares to sign off what has been a tremendously promising maiden campaign with the Corolla, reigning two-time BTCC Independents’ Champion Ingram has more silverware in his sights this weekend – while Team Toyota GB with Ginsters bids to prevail in a tight three-way tussle for seventh spot in the 20-strong Teams’ table.

All of the Brands Hatch GP race day action will be broadcast live and in high-definition on ITV4, beginning at 10:30am on Sunday (13 October).

“It’s incredible to be a title contender going to Brands Hatch for the third year in a row,” said Team Principal Christian Dick. “Especially when you consider some of the gambles and risks we have taken with the Corolla that haven’t always paid off – that progress is enormous credit to everybody involved in this project. We haven’t played safe by any means, and we have learned so much along the way. We’ve made huge strides forward, which has become particularly apparent in recent events.

“If you look at how we’ve performed over the second half of the season, we have every justification to be very positive and I fully expect us to be on the front-running pace at Brands Hatch. Our form at Silverstone can’t help but lift the confidence of everybody inside the team, and there’s no reason at all why we shouldn’t be really competitive again.

“We will enter the weekend carrying a little bit more success ballast than before which will make for a slightly tougher challenge in qualifying and race one, but I don’t expect it to hold us back too much around a lap as fast-and-flowing as Brands’ GP layout.

“There’s no question that the championship is the longest of long shots, but given how fractious things got between the top four at Silverstone, the potential is definitely there to pick up some pieces and perhaps gain a spot or two in the standings before season’s end – and we are obviously in a prime position to capitalise should it all kick off again. We have nothing to lose and don’t need to worry about anybody else. We can just focus on ourselves and shoot for more podiums and race wins, which would set us up nicely for a proper title challenge next year.”

“Given where we were back at the start of 2019, I’m absolutely made up to be heading to Brands GP still in the reckoning for the third year in a row, especially in a series as ultra-competitive as the BTCC,” said Ingram. “Obviously we’re rank outsiders given the points situation, but it’s never over until it’s over and we will push right to the very end. I don’t think we’ll be quite as super-quick as we were at Silverstone, but I am confident we’ll be up towards the sharp end again and we’ll certainly come out fighting!

“The development of the new Toyota Corolla was never going to be a five-minute job, but we’ve just been going about our business, quietly getting on with it and learning and understanding more all the time – and that has been reflected in consistent improvements, particularly during the second half of the season.

“We’ve definitely turned a corner over the last few race weekends, and to enter the final event inside the top five in the championship is something we can be very proud of as a team. We know the areas we want to work on this weekend, and I think we’re in a really exciting position now, with plenty more still to come from the Corolla. We go to Brands all guns blazing and in full-on attack mode, so let’s see where that leaves us when everything shakes out on Sunday afternoon…”