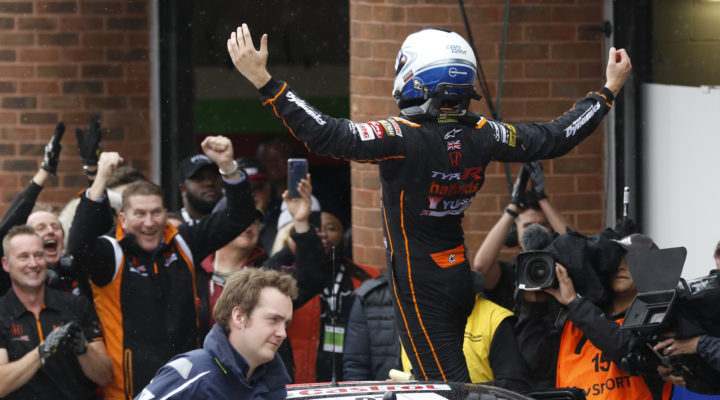 Halfords Yuasa Racing’s Dan Cammish claimed the most important victory of his BTCC career so far as the Honda star surged from 12th to first in the opening race at Brands Hatch.

The damp conditions gradually worsened during the contest, as a safety car period and tyre strategy came into play, for what turned out to be one of the most exciting races of 2019.

Pole-sitter Colin Turkington lost the lead off the line to Adrian Flux Subaru Racing’s Ash Sutton and the pair began an intriguing battle for the lead in the early stages. Team BMW’s Turkington squeezed back by at Druids a few tours later and the reigning champion was now holding a 28 point advantage in the live standings.

With rain now falling quite heavily, a host of cars came in to change on to the Dunlop BluResponse wet tyres, with Halfords Yuasa Racing’s Matt Neal being the first to emerge on grooved rubber.

Cammish was scything his way through the order as the handling of the Honda Civic Type R proved to be the standout contender in changeable weather, and he soon disposed of BMW Pirtek Racing’s Andrew Jordan. Sutton and Turkington were next to be pushed down the order by Cammish and the moment of truth followed on lap 16.

Race leader Butcher held the inside line through Paddock Hill Bend but Cammish blasted his #27 Honda around the outside at one of the most daunting corners in the world. The Yorkshireman emerged in the lead and never looked back. He was further buoyed when  team-mate Neal carved through the pack on wet tyres.

“I couldn’t imagine anything like that,” beamed Cammish. “I went to bed last night thinking my chances might be up. The BTCC is crazy. In the blink of an eye, what cost me two weeks ago at Silverstone worked in my favour this time. You put your trust in the team and what a call by them to leave me out there in the wet on slicks. It’s a bit emotional. Any drivers out there know how hard it can be to keep a car in a straight line in those conditions. They’ve given me a car with stability and rear grip when it counts.

“After the safety car, I thought I might have a chance with the rain falling. All my luck is just coming at once as I was sideways early on in a move with Ash (Sutton). Josh (Cook) got a tank-slapper on, too, and just avoided my car. The relief at the end there is huge. I’m overjoyed and a bit emotional. It takes such an effort. After that drive, if it’s not to be, I can’t help but be proud of what I’ve achieved in my second season. Win, lose or draw I’m in a very good place.”

Neal made a number of moves on the final lap, bringing Tom Chilton through with him, and the experienced duo eventually completed the podium – further relegating BMW’s title contenders in the process.

“I’d liked to have put a couple of quid on that result!” said Neal. “When the rain came down I just thought ‘we’ve got to roll the dice’ and bolt on the wets. To get a one-two is mega. There’s no better person on the grid than Dan (Cammish) to go and find grip where there is none. I wouldn’t have put my money on anybody else in those conditions. We’ve closed the gap on Colin (Turkington), so let’s see.”

Butcher and Turkington were fourth and fifth respectively, whilst Cobra Sport AmD AutoAid/RCIB Insurance’s Mike Bushell was sixth at his home track.

“They’re the most difficult conditions for us,” confirmed Turkington. “We were flying at the start when it was 95 per-cent dry. We had the measure on Ash (Sutton). Then the safety car came out and the rain fell and temperatures follow. I just knew from there we’d be powerless to the front-wheel drive cars.

“It’s still a good P5 finish but not ideal seeing Dan (Cammish) win from where he came from. We expect surprises on finals day but we could have done without the weather!”

Team Parker Racing’s Stephen Jelley was seventh, whilst Jordan had to settle for eighth at the finish. The Team HARD-run VW of Jack Goff and Motorbase man Ollie Jackson rounded out the top ten positions.

When the dust settled Turkington’s advantage at the top of the order had been reduced to just eight points to Cammish, whilst Jordan is now 22 points off the championship summit. Both Josh Cook and Tom Ingram fell out of title contention, as the former retired before the latter dropped to 23rd with his own separate problem.