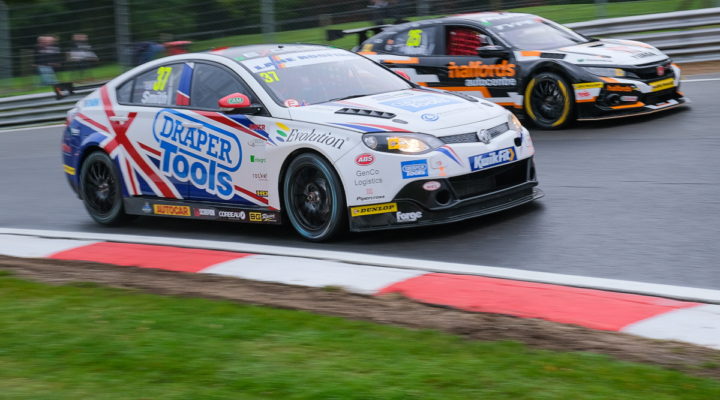 Rob Smith enjoyed a positive conclusion to his maiden season in the Kwik Fit British Touring Car Championship at a rain-hit Brands Hatch Grand Prix Circuit in Kent, with the MG6 racer taking his sixth Independents’ Trophy points hat-trick of 2019.

Racing to a best finish of 12th in class during Round 28, the Telford driver went on to add 13th in the Independents’ in Rounds 29 and 30 later in the day and also posted a pair of top 20 overall results.

Ending his debut season in the UK’s biggest motor racing series 16th in the Independent Drivers’ standings, the Excelr8 Motorsport driver also ended his rookie BTCC campaign fifth in the Jack Sears Trophy – a battle contested by drivers yet to finish on the podium prior to the start of the campaign. In addition, Excelr8 concluded its maiden season in the championship inside the top ten in the Independent Teams’ classification.

“It’s difficult not to feel a bit frustrated as you always want to win in whatever you’re doing, but this has been our first year in the BTCC – all of us have come into it completely green and so we have to be happy with what we’ve achieved,” said Smith. “The team has done a mega job all year, it’s all been a huge learning curve and the car has been pretty much faultless, mechanically, all season.

“Operationally, and from a presentation point of view, everything has been fantastic and Excelr8 won the award for ‘Best Garage’ which is something we’re all very proud of. Our aim was to do the very best we could on the commercial side for our sponsors, and I think we achieved that by looking like a team that’s been in the BTCC for three or four years – not just our first season.

“In terms of the track action at Brands Hatch, it was our second-best qualifying of the year and, in very tricky and unpredictable conditions, we did a good job in all three races. Now the hard work starts for next season to hopefully renew the partnerships we have, and also bring in new ones. We have a year of vital experience now in the BTCC which we can build on for 2020.”

Both practice sessions at Brands Hatch were impacted by interim wet conditions and so not much useful information could be gleaned from either of the runs. Qualifying later in the day was wet and Smith was 14th fastest in the Independents’, equating to 24th overall.

An almost dry track awaited competitors for the first of the championship finale’s three races and, at the start, Smith got away safely through the first couple of corners.

Into Graham Hill Bend, though, the MG6 racer was put wide onto the grass and so dropped to the tail of the field in 30th position. By the start of lap three, Smith had zeroed in on the rear of team-mate Sam Osborne’s MG6 and the next time around he made his move to take 29th and 19th in class before the Safety Car was deployed.

During the lengthy cessation, the rain returned and half the grid opted to change to wet-weather tyres, Smith included. Climbing up the order after the re-start on lap 11, he went on to finish the race inside the overall top 20 and a strong 12th in class.

Beginning the penultimate race from 20th on the grid, Smith ran with treaded Dunlops on a wet-but-drying track and had to avoid multi-car contact on the run up to Druids to emerge in 19th overall and 12th in the Independents. Following a brief safety car period, the action got back underway on lap six with Smith an elevated 18th and 11th in the Independents due to one car having pitted.

Another safety car was required between laps 11 and 13, after which Smith was edged back to an eventual finish of 20th overall and 13th in class when some quicker slick-shod cars made their way through with the drying track starting to favour their tyres.

For the last race of Smith’s maiden season in the BTCC, he started on the soft compound option tyres from row ten of the grid and, although shuffled back several places on a busy first lap to 27th overall, he progressed through the order to take his third Independents’ points haul of the day.

By lap five the Excelr8 driver was into 24th overall, and the top 15 in class, and as the race neared its conclusion he had moved into 23rd and also 13th in the Independents’. With just two laps to go, an excursion into the barriers for Dan Cammish’s manufacturer-backed Honda Civic – a result of brake problems – elevated Smith into 22nd overall and he retained 13th in the Independents.

“It’s been a great year and I must say a huge thank you to all of my sponsors,” said Smith. “They are the ones who made the season possible. Without their support, we wouldn’t have been able to step into the BTCC.”