Rowbottom: the season has been a real eye-opener 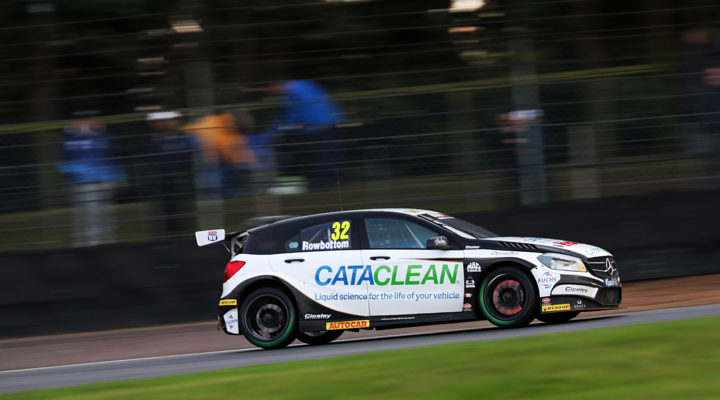 Dan Rowbottom rounded out his maiden season in the Kwik Fit British Touring Car Championship with a points-scoring finish in the penultimate race of the campaign, held in trying weather conditions at Brands Hatch in Kent.

Behind the wheel of his Cataclean Racing with Ciceley Motorsport Mercedes-Benz A-Class, Rowbottom began the weekend working through set-up adjustments on a greasy track, which was neither wet nor dry. Unable to find a rhythm in the traffic, Rowbottom concluded qualifying with a best time that would see him 27th on the grid for the opening encounter.

The opening race began on a damp track, but rain started to fall early when the race was neutralised by a safety car period to haul an errant car from the gravel trap. Rowbottom dived for the pit lane to change to wet tyres, storming back into the race ready to pick off places as the weather worsened.

Unfortunately for Rowbottom, the conditions didn’t deteriorate as expected, meaning that the cars on slick rubber still held an advantage until the last handful of laps when the rain really started falling in earnest. The #32 driver grabbed 18th place at the end of the race, but felt some disappointment that his tyre strategy had not paid off.

“Before the stop, I was 28th, so certainly it was the right call as it gained me places, but if the rain had been heavier, I could have made even more progress. I was a bit frustrated, but by the weather, nothing more!” said Rowbottom.

For the second race, the teams had a similar weather-induced quandary over tyres. With the track still damp but drying, the majority of drivers chose wets, with some gambling on slick rubber. As the penultimate round unravelled, however, the wet-shod cars retained a race-long advantage, as the circuit took longer to dry than anticipated. Rowbottom forged his Cataclean Racing Mercedes-Benz A-Class up to 12th place early on, before his tyres started to lose their edge.

“I was a bit greedy after the first safety car period, I think, and I just pushed a bit too hard,” said Rowbottom. “That meant that the tyre life decreased late on and I lost pace.”

From 15th on the grid for the final race of the season, the 30-year-old was optimistic but the cruel nature of the BTCC was to strike yet again as his front left tyre exploded heading through the daunting Paddock Hill Bend. Rowbottom limped back to the pits, but his race was over.

“That was scary! The car felt good and I was really hoping to get up the order, but it wasn’t to be,” said Rowbottom. “It was a big bang and did some damage as the tyre went, so I had to park it.

“The season has been a real eye-opener overall. People said it was a tough championship, but it has been a lot tougher than I expected. We have run under the radar a bit, so I have been able to get on with learning the car and about the championship without too bright a spotlight on us. I want to return next year and repay the faith shown by Cataclean. As a brand, it has received massive coverage this year by being on the BTCC grid so it is certainly the place to be and I think with the lessons learnt we can come back stronger for 2020.”