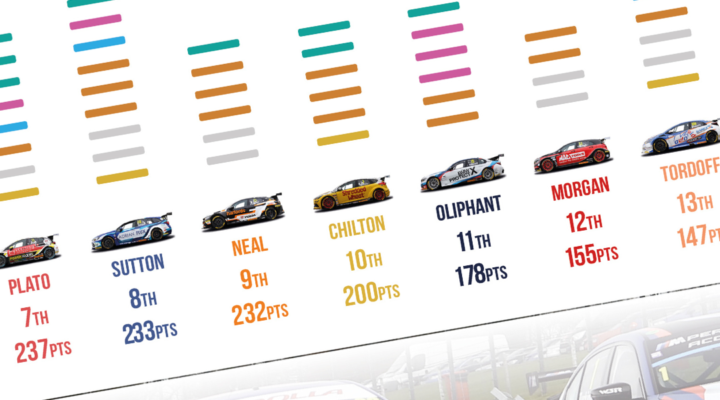 Who were the drivers to be reckoned with during the 2019 Kwik Fit British Touring Car Championship? Our Accolade Tracker reveals all – every driver who’s achieved a podium, pole position, fastest lap or points for leading a lap is included.

Champion Colin Turkington and runners-up Andrew Jordan and Dan Cammish are expectedly near-on inseparable at the sharp end of the tracker, with Turkington’s fastest lap tally outstripping Jordan by a couple – a factor which contributed to his record-equalling title win.

Between Turkington’s top tally for fastest laps and stablemate Jordan’s number of wins, it’s clear why the BMW’s topped the standings, showing just how potent the 330i M Sport is in BTCC trim.

Josh Cook, Ash Sutton and Tom Ingram notched the most points for leading a lap, excluding the BMW pair who topped the order, while Honda man Cammish attained the highest number of podiums, with both the most second and third-place finishes under his belt. Sutton and Sam Tordoff’s high number of accolades is testament to their strengths throughout the season, despite some drivers having placed higher in the standings with fewer accolades.