TOCA Night of Champions draws BTCC 2019 to a close 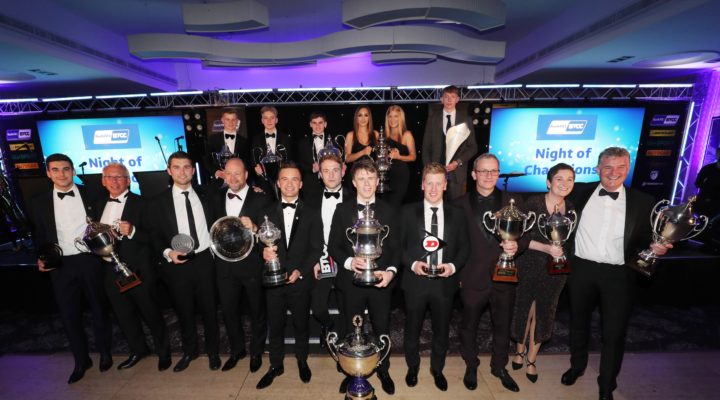 The final curtain came down on an action-packed season in the Kwik Fit British Touring Car Championship as the paddock reconvened for the annual TOCA Night of Champions on Saturday (23 November).

Honouring not just the racing stars but everyone that contributed to Britain’s premier motorsport championship in 2019, the event once again provided a fitting end to a year of hard work and dedication.

The BTCC celebrations began with the Engineer of the Year, an award first introduced in 2016. Having previously achieved the title in 2017 while working with Ash Sutton and Subaru, West Surrey Racing’s Dan Millard attained the honour once again, for his work on Colin Turkington’s all-new BMW 3 Series.

The Dunlop #ForeverForward honours went the way of Adam Morgan, as the Mac Tools with Ciceley Motorsport man produced a number of stellar attacking drives.

Cobra Sport AmD AutoAid/RCIB Insurance Racing scored a total of four victories and a further six podiums on its way to the Independent Teams’ Championship and third place in the overall Teams’ standings.

Halfords Yuasa Racing ended Team BMW’s three-year reign at the top of the Teams’ table and claimed the championship for the first time since 2013. Matt Neal and Dan Cammish went head-to-head with the BMW drivers throughout 2019, before clinching the Teams’ title at the end of a remarkable and memorable battle.

For the third successive year, the Manufacturers’ title was claimed by BMW, no mean feat considering the West Surrey Racing team readied the brand new and striking BMW 3 Series on the eve of the 2019 season. They were pushed all the way by the opposition but eventually, it was the German marque that came out on top once again.

The Independent Drivers’ Championship saw Tom Chilton and Josh Cook take third and second, respectively, before Rory Butcher took the 2019 title. Alongside this, the Scot also claimed the Jack Sears Trophy as well as being in overall title contention until the penultimate event of the season at Silverstone.

Pirtek Racing’s Andrew Jordan and Honda man Dan Cammish secured second and third place in the Drivers’ Championship, having both put up a strong fight for the title, adding to the dramatic finale at the Brands Hatch GP circuit.

The presentation was rounded off with the most coveted prize in British motorsport, the Drivers’ crown. This past season saw one of the closest fought BTCC title races in history with the top three separated by just two points when the final chequered flag fell. The phrase ‘it’s not over until it’s over’ rang true at Brands Hatch, with the title being decided with minutes left to run. One man eventually rose to the top of the pile, however, with Colin Turkington became British Touring Car Champion for a record-equalling fourth time, drawing level with the great Andy Rouse.

“By far, that one was the hardest to get and means the most because I thought I’d lost it after Round 29; I really thought it was beyond us,” said Turkington. “I’ve never been so emotional in my life. When Dan came on the radio and said that I was Championship leader on the penultimate lap, it was the shock that made this one even sweeter.

“Even two weeks after I was just in the clouds. The BTCC has been such a huge part of my life, for 17 years now I’ve been in the championship. Your first goal is to get a podium, then you think ‘I’ll go for a win’, then you target a championship and the first one is obviously very tough to get. To think I now have four is difficult for me to believe, but I can only achieve these things being with an amazing team like West Surrey Racing.

“I want to say congratulations to Dan (Cammish) and Andy (Jordan) because that last race could have gone one of three ways, it went my way this time, but those two would have been deserving winners as well. The cards fell my way this time and I’m truly thankful for that. Another person I’d like to thank is my engineer, Dan Millard, it was a big change for us both this year and I think when you change something fundamental like an engineer, I was nervous going into the season.

“Obviously, I knew that Dan had won the championship before with Ash (Sutton) but from day one we gelled, we were a team and we worked really hard together. For round 30, before he left the grid, he said to me ‘you can still do this, if anybody can win, you can’. When somebody tells you something like that you can tell that they have total belief in you, so Dan thank you so much.”