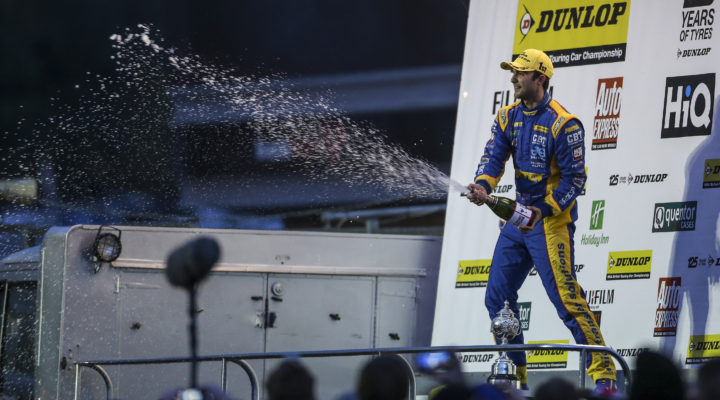 Throughout the next fortnight, Motorsport News Editor Matt James will continue to reveal his top ten memories from the last ten years of the British Touring Car Championship. Today, James recalls the BTCC showdown of 2013.

This was David versus Goliath, but it was also the story of one man staking his claim to be regarded as the best of the new wave of talent. In a category that had been dominated by the established names like Jason Plato, Matt Neal, Gordon Shedden and Colin Turkington, Andrew Jordan was something of an upstart back in 2013.

He wasn’t with one of the powerhouse teams, he was part of the family-run Eurotech Racing squad. He hadn’t been in the heart of a title showdown before. Indeed, he had only won four races when 2013 kicked off.

But it clicked. He worked hard with his father Mike at the preparation of the machine, and forged a great relationship with his race engineer, his brother-in-law Adam Hardy. Work on how to get the best from the Dunlop rubber involved Jordan changing his driving technique to be kinder to his tyres, and it reaped huge rewards.

Still, there was work to be done and perhaps his best performance of the year came at Rockingham, with only three meetings remaining. He mastered the damp conditions to power to his first career weekend ‘double’, with race one and race three victory. He walked away from Northamptonshire with a 30-point buffer over Shedden.

At Brands Hatch, the wheels so nearly came off for Jordan. He was the innocent victim of a race-two shunt between Aron Smith’s Ford Focus and Rob Collard’s BMW. As Jordan checked up to avoid the chaos, Neal’s Honda clipped the side of the points leader and broke his suspension. It was Jordan’s first non-finish of the entire season.

With Shedden finishing race two in seventh spot, that cut Jordan’s points advantage to just 20. And then, to cap it all, Shedden was drawn on the reversed-grid pole while the Pirtek-backed Jordan would start on the back row in 24th spot.

Jordan didn’t hang about. By half distance in the 15-lapper, he was in the top 10. With Shedden fighting off a spirited challenge from Jack Goff in the Team Hard Vauxhall Insignia to take the win, Jordan simply had to stay there. He did that and more. He improved to ninth at the flag and it was the eight points he needed to push the title silverware from Shedden’s grasp.

“After the second race, my dad [Mike] and I spoke to each other and we knew that the finale was where I had to prove that I deserved the title,” said an emotional Jordan afterwards. “I needed to produce a champion’s drive, and I think I did that.”