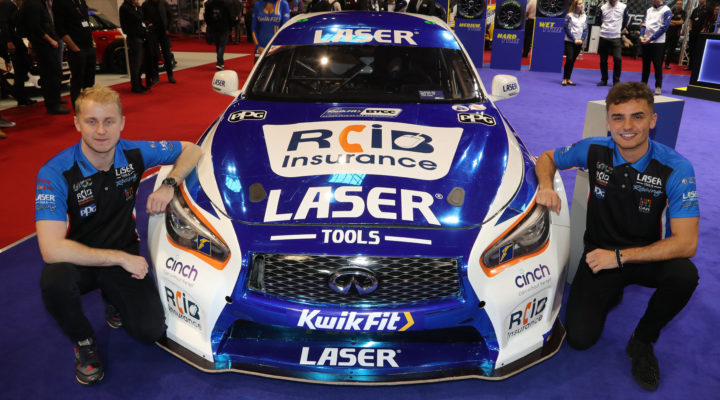 Autosport International has established itself as a ‘must-attend’ fixture for any Autosport enthusiast or Autosport team every January. Held in the vast halls at Birmingham’s massive NEC, teams from all genres of Motorsport use the event to shake off the January blues and publicise their plans for the year ahead, introduce new driver signings, and allow the public to have a ‘first look’ at the vehicles and their new liveries.

The newly expanded Laser Tools Racing team which is again entered to compete in the 2020 Kwik Fit British Touring Car Championship – this year with a 2 car/driver line up – has today used this traditional opportunity to unveil the new livery for their highly attractive, and much revered Infiniti Q50 NGTC cars.

This year, piloted by the highly experienced Laser Tools Racing ‘old hand’, Aiden Moffat, and off-track friend, former Jack Sears Trophy champion, and 2017 BTCC champion Ashley Sutton, the cars promise to be as exciting on track for the season ahead as today’s unveiling of the stunning looking Q50s were in their static environment in Birmingham. Whilst glimpses of the latest car have been had, the unveiling at Autosport has confirmed sponsorship involvement from RCIB.

The Essex based Insurance Broker has been a sponsor of the Laser Tools Racing managed single-entry car for a number of seasons, but the expansion to a two-car set-up for the 2020 season has also seen an expansion of RCIB’s sponsorship of the team.

“We are proud to be major sponsors for the exciting driver pairing of Aiden Moffat and Ash Sutton,” said RCIB CEO Mike Joseph. “We have worked with both drivers at the beginning of their BTCC careers and they have now gone on to become great drivers.

“Aiden and Ash are both excellent brand ambassadors for RCIB and are amongst the best drivers on the grid; we are confident that they will achieve great things this year in the Laser Tools Infiniti and we are really excited to be a part of it.”

“I have known Bob Moffat a long time and when I was offered the chance to increase our sponsorship with the team and move to two cars it was an easy decision to make.”

“It’s great to be working with RCIB again,” said Sutton. “They were a big part of making my graduation to the BTCC happen back in 2016. So, to be partnered back up with them again is fantastic and hopefully I can repay them for all their support, but this time behind the wheel of the Infiniti Q50.

“There’s lots going on behind the scenes with the build of two new cars for this upcoming season and I personally can’t wait to get going, I haven’t been this excited for what’s ahead since 2017. It’s great to see the colours of RCIB tie in so well with the addition of the orange on the car, it looks smart and I can’t wait to see what it looks like on track for the first time!”

“It’s great to continue working with RCIB Insurance and Mike Joseph,” said Moffat. “We have been together since my first ever season in the BTCC and have built a great relationship and friendship so to have RCIB as such a big part of this exciting new Laser Tools Racing project with the new Infiniti Q50’s and Ash joining us is really exciting for me.

“This is the most enthused I’ve been for a season. The Laser Tools Racing car is one of the best-looking cars on the grid in my eyes, but we always like to make little changes to keep things fresh, so tying in the RCIB colours with our striking Laser Tools Racing colour scheme makes for a stunning livery!”

“Right Choice Insurance Brokers are a big name on the BTCC grid and have been for years now so it’s great having them on board.”

“This is great news for us — Mike Joseph and the team at RCIB Insurance are all committed BTCC enthusiasts and this makes it a pleasure to work with them,” said Laser Tools Racing Team Principal Bob Moffat.

“RCIB first supported Aiden in his maiden season and have continued to support him ever since. The commitment they have made this year to the Laser Tools Racing Infiniti Q50 two-car team of Aiden and Ash is instrumental to the development and we are all extremely eager to get going.”