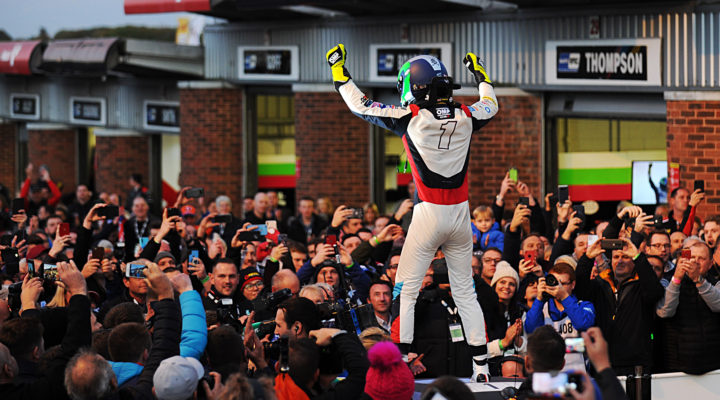 Over the first fortnight of the decade, Motorsport News Editor Matt James will continue to reveal his top ten memories from the last ten years of the British Touring Car Championship. The last showdown in James’ ‘Perfect 10’ was the dramatic finale of 2019, where the action, exhilaration and heartache on-track made for one of the most unforgettable finales of the decade.

Fourteen corners and just over three miles. The British Touring Car Championship season in 2019 was that close to its conclusion when the entire picture changed.

The sight of Dan Cammish’s Team Dynamics-run Honda Civic Type R pirouetting into the tyre wall is the overriding image of the year. All the Yorkshire man needed to do was to register a handful of points to claim an unlikely crown, one that would have been won by a dint of hard work and never giving up in the face of extremely long odds.

By rights, Cammish shouldn’t even have been in this position. The WSR BMW 330i M Sports of Colin Turkington and Andrew Jordan had been the class of the season, sharing 11 wins between them.

But Cammish had hung on grimly to their coattails. A succession of podium finishes had kept him in the picture, and when Turkington was in contact with Matt Neal’s Civic in the penultimate race at Brands, the pendulum took an almighty swing. Turkington felt aggrieved that Cammish’s team-mate had been the cause of his delay in race two, claiming it had been a “professional foul”. Emotions were running high in the heat of the battle.

Gone was the BMW man’s advantage and Cammish assumed command of the points. Sure, it was only by eight marks, but he was in control. Turkington started the third race in 25th spot and had it all to do. Cammish could be the master of his own destiny.

Except he wasn’t, as the brakes on his Honda were running hot from the off. He managed the problem as best he could and that even allowed him to let the flying Turkington ahead on lap 12 so the BMW ran in sixth spot. It still wasn’t enough for Turkington if Cammish could hold on. He could, but his brakes couldn’t and they shattered with just a handful of miles remaining.

Cammish was dignified in his defeat and immediately paid credit to his victorious rival. Turkington, who had gone into a title-winning season behind in the points going into the final race for the first time, knew he had driven the race of his life to win, but admitted that he had been fortunate.

“That was the hardest title I have won,” said the Northern Irishman. “For sure, I thought it was gone after race two. But, in this championship, you just never know what is going to happen. You have to believe, and your hard work reaps rewards. But that was one hell of a race.”