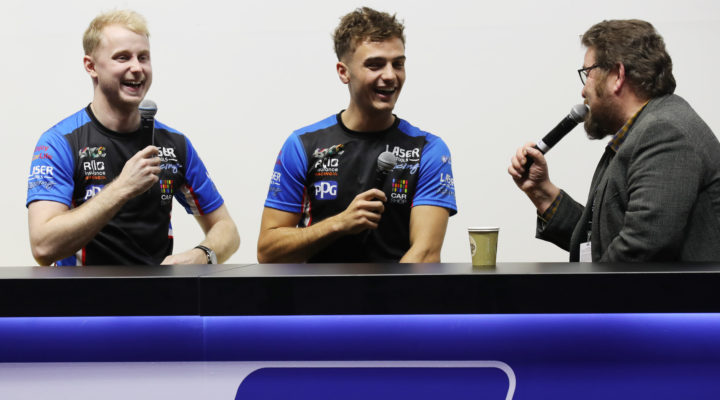 As the Kwik Fit British Touring Car Championship kick-started its 2020 season at Autosport International last week with myriad driver and team announcements, BTCC caught up with Laser Tools Racing’s Aiden Moffat and Ashley Sutton as they unveiled the updated livery for the squad’s pair of Infiniti Q50 touring cars.

“It’s by far the most excited I’ve been at the start of a season,” said Moffat. “Now that we’re building two brand new Infiniti Q50s, expanding Laser Tools Racing to a two-car team, and working with Ash Sutton, it’s all coming together. Ash is bringing his race engineer Tony Carrozza to the team and I’m staying with my race engineer Federico Turrata, so it’s going to be a very exciting year for everyone.

“Engineering-wise, we’ve been working very hard over the winter on building the two new Infinitis and redesigning them literally from the ground up. We’ve much-improved weight distribution and stiffness in the shell, and after a session in the wind tunnel at MIRA in December, the aero is substantially modified and improved.

“Ash Sutton, with his experience and the fact that he’s a great person to work with, means that he’s a great person to learn from. But at the same time I’m very confident in my own ability and I’m feeling at home with rear-wheel drive, it feels very suited to me. Deep down, I’m quietly confident I’ll get back up to the front and we’ll have two Laser Tools Racing cars at the front of the grid.

“The advantages of a two-car team are obvious: having a team-mate to work with is going to be a massive help. Knowledge and experience are key — Ash has done three years in the rear-wheel-drive Subaru and won the championship. His engineer Tony Carrozza brings a different way of looking at things for myself and Federico, and for us all to come together it speeds up the process of developing the new Infinitis.”

“The car that Aiden ran in 2019 was first brought into the championship in 2014,” said the 25-year-old. “Although Laser Tools Racing updated it to the current NGTC specs, it is, shall we say, a little bit out of date. With the build of the two new cars behind the scenes, a lot of what we have learned with the Subarus, which was a constant evolution, has been carried over into the design of the new Infinitis. That is going to be a key part of pushing this car onto the next level.

“The challenge that we will be up against this year will be understanding and finding our feet with the two new cars. We fully intend to take the fight up to the likes of the BMWs and the Hondas, but there are new names on the grid, as well as drivers in different teams this year, so we don’t really know what to expect for this upcoming season.

“However, I haven’t been this excited since 2017, the year we won the championship. I feel the puzzle is coming together nicely for us to be in the title picture by the end of the season. The key thing for me is to be consistent — yes, everyone wants race wins, but we’ve got to pick points up. Points mean prizes and we’re after that big prize at the end of the year.

“We’ve already made quite an impact, with the expansion of Laser Tools Racing and me joining the team. You’ve got two young drivers that are both very fiery, that’s a combination bound to turn some heads and it seems to be doing that already. I’m all about playing the team game, working together is what makes us grow and will push us further up the grid, bouncing information back and forth, learning from one another and making sure that we look out for each other on the circuit. Touring car racing is very close, rough and tough — to have a team-mate that you can rely on for backup is crucial.”