MATT JAMES’ PERFECT 10 OF THE ’10S: THE MAGNIFICENT SEVEN 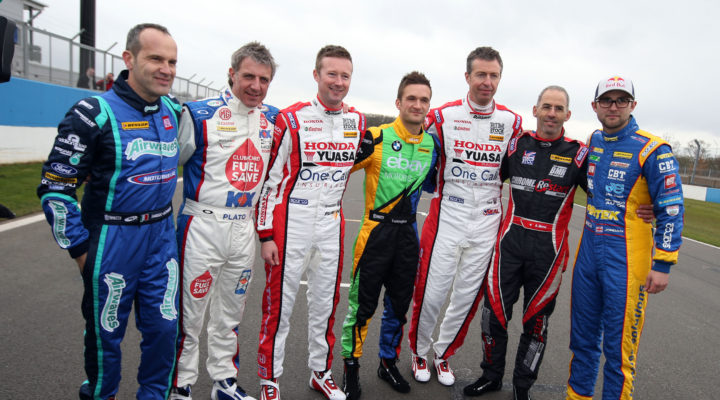 January is always a busy month for the British Touring Car Championship. The teams beavering away to fettle cars for the forthcoming season – or, indeed, create brand new ones. It is also a frantic time for the team managers too as they scour the landscape for any likely drivers for the forthcoming campaign. In January 2014, the headlines almost wrote themselves.

Andrew Jordan went into the season as the reigning champion, and he stuck with his family-run Eurotech Racing team to race a Honda Civic Type R. The factory Team Dynamics Honda pairing of Matt Neal and Gordon Shedden remained too. Jason Plato, a two-time titleholder, was back in the line-up with the Triple Eight Race Engineering-run MG6.

Colin Turkington, who was fifth on his return to the BTCC in 2013 with a WSR BMW 125i M Sport, was also set for a second term with the German machine.

Taking that crop of talent into account, five champions going door handle-to-door handle was lip-smacking enough, but then the attention ramped up even more.

At that time, Alain Menu was fifth equal in the list of overall race winners with 36 victories. He had been a familiar face in the BTCC paddock in his role as driver advisor with BMR Racing, but when team boss Warren Scott decided to give the then 50-year-old a full-time race drive in a VW CC for 2014, the fans were delighted. The Swiss racer, who had claimed the crown with Renault in 1997 and with Ford in 2000, brought the title-winner count to six.

And then came the real curveball with Italian Fabrizio Giovanardi, who had been forced out of the BTCC following Vauxhall’s withdrawal at the end of 2010, announcing his return. The 2007 and 2008 victor, then 47 years old, inked a deal with David Bartrum’s Motorbase Performance team to handle a Ford Focus. Make that seven champions.

In the end, it was the younger brigade who prevailed with Turkington taking a second title for WSR ahead of Plato and Shedden. The old guard struggled, but Menu made a spectacular return to the podium at Rockingham and that followed that up with another Silverstone. The pace might not have been there for either Menu or Giovanardi, but it was a hugely popular cameo from them both.