MATT JAMES’ PERFECT 10 OF THE ’10S: SENNA PROCTOR BEATS THE ODDS – AND EVERYONE ELSE… 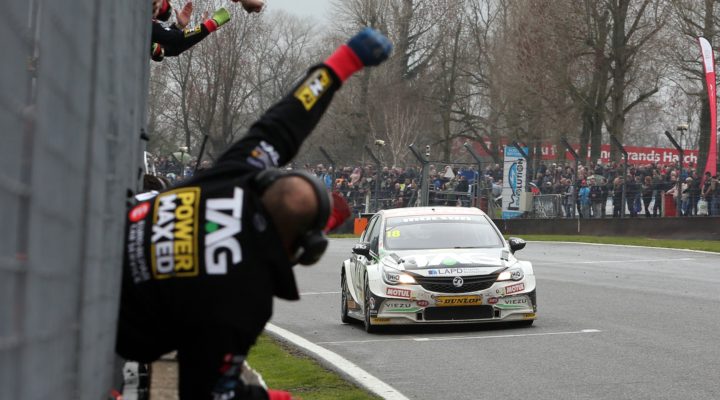 For the penultimate episode of Motorsport News Editor Matt James’ top ten memories from the last ten years of the British Touring Car Championship, we’re looking back to 2018, when Senna Proctor produced an impressive drive at Brands Hatch, from 27th on the grid to the top step of the podium!

There was unbounded joy on the podium for the second British Touring Car Championship race of the season at Brands Hatch in 2018. All three of the men who scaled the rostrum were doing so for the first time after a truly bonkers 27 laps.

They had been the brave ones, the guys with nothing to lose. The wet-but-drying circuit played perfectly into the hands of those who wanted to gamble.

Eventual winner Senna Proctor started 27th on the grid in his Power Maxed Racing Vauxhall Astra. Second place finisher Jake Hill began the event in 25th in his Team Hard Volkswagen CC, while Ollie Jackson – who completed the podium – had started the race in 12th position.

They all knew it was a risk to opt for slick tyres, but one that paid the ultimate reward, and just 11 of the 32 starters went for dry Dunlops.

Proctor’s engineer Rob Peacey steered the tyre decision. “I started on the 14th row of the grid and it was definitely pretty hard from back there,” Proctor explained. “I went out and there were a few drying patches. I had watched the Renault Clio Cup race and the race before that and there had been quite a bit of spray, but when we went out there was much less so I could see that it was drying quite rapidly.

“I said over the radio that there were a couple of drying patches and my engineer said, ‘the slicks are going on, it is non-negotiable’. That was it: he made my decision for me. I questioned it, but by the time the red lights went out, I thought ‘well, we are here now, let’s just do it’.”

It took a while to come to him though. It wasn’t until eight laps to go that the train of slick-tyred cars had climbed into the top 10.

Aiden Moffat (similarly slick-shod) got caught out going into Clearways and slewed sideways, which allowed Hill and Proctor to assume the charge of the dry-tyred racers.

Proctor managed to overhaul Hill (who was struggling with a broken radio and no communication with the pits), but Moffat wasn’t out of the picture.

On lap 22, it came to a head: Proctor got inside leader Jack Goff’s Eurotech Honda coming out of Paddock Hill Bend and took the lead, but he only had it for a few seconds as the recovering Moffat jumped them both up the inside a few hundred yards later at Druids.

Even then, the action wasn’t done. Proctor got underneath Moffat coming out of Druids on the penultimate lap and the pair made the slightest of touches. Moffat fired hard into the bank, but remarkably the car held together, and he came home in fifth spot.

But the ultimate joy belonged to Proctor in what had been one of the British Touring Car Championship’s blockbuster races.