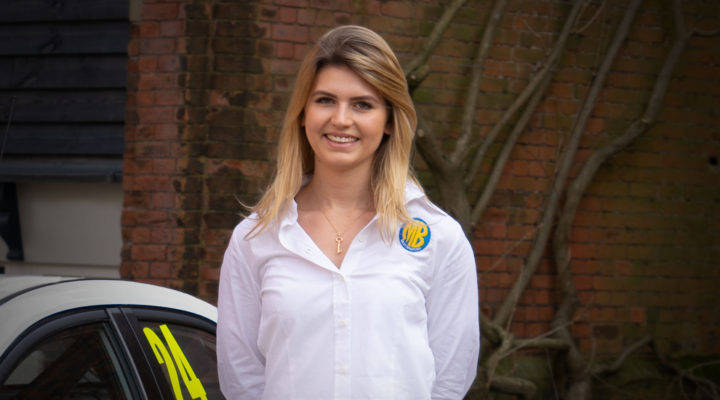 Esmee Hawkey, one of the UK’s leading female racing drivers, has joined MB Motorsport as Official Development Driver ahead of the rebranded outfit’s maiden campaign in the Kwik Fit British Touring Car Championship.

Building on her participation in the inaugural season of the W Series, and a third place championship finish in the Pro-Am class of the Porsche Carrera Cup GB last year, the new season will see Hawkey embark on another assault on the Carrera Cup GB having teamed up with Championship-winning outfit Team Parker Racing.

Alongside her racing duties week in and week out as part of the BTCC’s support series, Hawkey will work closely both on and off the track with the MB Motorsport team over the course of the year, with a structured programme being put in place to help the 22-year-old take the next step in her promising racing career.

This support programme will see Hawkey working with MB Motorsport drivers Jake Hill and Sam Osborne, as well as management duo Mark Blundell and Shaun Hollamby, on all aspects of her continued driver development. The development programme will encompass continued on-track coaching, simulator development and off-track mentorship, including everything from PR and media training to commercial activation.

The role will see the Chislehurst-based driver gain a thorough understanding of the operational processes of the BTCC leading up to the championship’s mid-season official test at Snetterton, where Hawkey will get her first experience behind the wheel of the MB Motorsport FK2 Honda Civic.

Excited about what lies ahead, Hawkey is looking to utilise the new role to learn as much as possible to accelerate her continued development.

“I am over the moon to be working with MB Motorsport throughout the 2020 season,” she said. “Last year was a great year for me, experiencing the W Series and continuing my development in the Porsche Carrera Cup GB but I feel like 2020 has to be the year that I take the next step in my career. For me, there is no better way than surrounding myself with people who have the knowledge and experience of making their own way up the motorsport ladder, which is exactly what I am trying to do.

“Working with the team across all aspects both on and off the track is going to be a huge help to my development. We’ve already started out on a great footing with some of the work behind the scenes to help me start the season strongly, and we’ll be building up to me getting behind the wheel in the middle of the season too which I can’t wait for!”

The new development role is one element of the team’s continued partnership with HP UK, which took to the track for the first time in 2019 through Mark Blundell’s own racing return. This partnership will come to life in new ways for 2020 through a broad-ranging programme that will provide opportunities to new and young talent across the MB Motorsport team, support HP’s channel partner engagement across the UK, and deliver unique event-based opportunities throughout the year ahead.

Welcoming Esmee to the team, MB Motorsport’s Sporting Director, Mark Blundell, is excited by how the team can help drive forward her racing development throughout the year.

“There are so many different elements that go into making a top-level racing driver in the present day and you can only improve and develop across all of these when you are exposed to them – this new role will allow Esmee exactly that,” he said. “Esmee has made a thoroughly impressive start to her career, has some great people already around her and we are hoping that we can help accelerate this development this year through her new role.

“With Shaun having already worked with her during the early stages of her career, he is well aware of the talent Esmee possesses, and I was also able to see that first hand myself last year where she produced a number of impressive drives in the Carrera Cup.

“The last fifteen years of my career have been spent trying to provide opportunities for young people to make the most of their talent no matter what barriers lie in their way, and HP UK are just as passionate about that too. We are really looking forward to continuing our strong relationship with HP UK and this new opportunity for Esmee is just one part of that.”