BACK TO SCHOOL FOR BTC RACING AND MICHAEL CREES 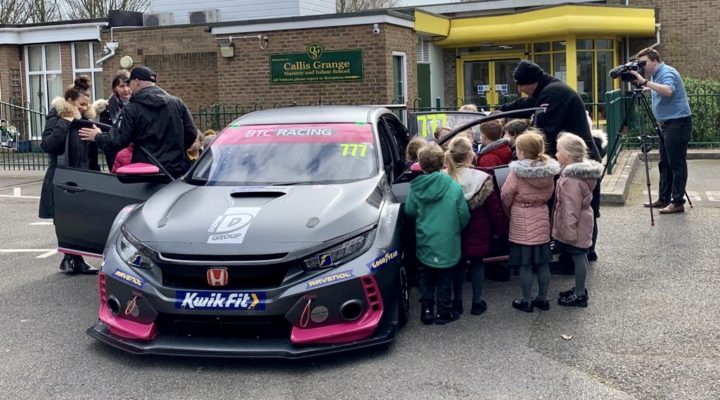 Callis Grange Nursery and Junior school in Broadstairs got the week off to a thrilling start today (9 March) thanks to a specially-arranged visit from local Kwik Fit British Touring Car Championship racer Michael Cress, and the BTC Racing team.

The local authority community school, which teaches children between the ages of three to seven years, invited Crees along to take part in an ‘inspiring’ morning celebration. With Crees’ own children both pupils at the school, he and BTC Racing worked in conjunction with Head Teacher Alison Marshall to pull together a unique and interactive event to help inspire the children to follow their dreams.

The morning’s activities began with a short introduction from Crees during the school assembly before the children moved outside for an up-close look at the squad’s race-winning BTC Racing Honda Civic Type R touring car and a tour of the trailer used during race weekends.

Each pupil also has the chance to win race day tickets for their family at Brands Hatch on 12 April, where they will be welcomed as VIP guests of the BTC Racing team and receive full hospitality, including paddock access and a personal garage tour from Michael himself.

The local press were in attendance throughout the morning, with BBC South East today covering the proceedings for its early evening broadcast which is scheduled to be shown on BBC1 at 1830 tonight.

“What a fantastic day,” said Head Teacher Alison Marshall. “Michael has been an inspiration to the children.  He has shown that if you work hard, practise, and take advice from those that are there to help you, you may achieve your dream.

“With Michael as a parent at the school, it has clearly demonstrated how parents and the school can work together to provide special, memorable experiences for the children. I cannot thank BTC Racing enough.”

“The kids were absolutely amazing,” said Crees. “They were so well behaved; each and every one of them got involved and interacted with us. They were a credit to the school. When they came out to see the car, their faces lit up. A few of them knew about racing, but it was something completely different for the majority, so it was a great experience for them all.

“Every single pupil has entered the competition to win the VIP race day passes. I’m sure that we’ve picked up a few new BTC Racing and BTCC fans along the way!

“Thank you to Alison Marshall and all of the staff at Callis Grange for making us all feel so welcome and to the local press and BBC for coming along to support us.”

BTC Racing now heads to Brands Hatch, ahead of testing tomorrow at the Kent circuit, where the full three-car lineup will be out in force as Michael Crees, Josh Cook and Tom Chilton all hit the track.