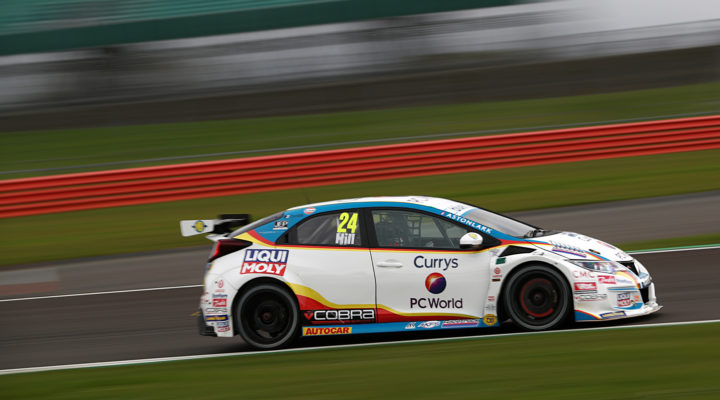 MB Motorsport accelerated by Blue Square team made an impressive start to life in the Kwik Fit British Touring Car Championship yesterday (17 March) with a front-running performance on track during the Season Launch official pre-season test at Silverstone.

Having tested at a number of circuits during the winter with its Honda Civic Type Rs, the Silverstone event provided the only opportunity for the team to go head-to-head against its on-track rivals in an official test, with a full day of running available across two sessions.

The morning session saw drivers Jake Hill and Sam Osborne busy on track as they worked to gain valuable knowledge of Silverstone’s International layout, which is due to host the penultimate meeting of the season later in the year.

Hill would end the morning with the fastest time of the 29-car field, becoming the first driver to set a lap at an average speed in excess of 100mph, and ending up three-tenths of a second clear of the works BMW of Andrew Jordan. Osborne, meanwhile, lapped quickly and consistently in the sister Honda to end the morning’s running sitting in 20th place.

Times would drop during the afternoon, with Hill once again running right at the sharp end of the grid as he quickly slotted his Honda into second place on the times behind the Toyota of Tom Ingram.

The 26-year-old looked well set to complete a sweep of both sessions late in the day but a combination of traffic and a late red flag meant he had to settle for second on the combined times; his best lap being just 0.051s away from the fastest seen on track.

Osborne’s continued improvement was reflected by the fact that his fastest lap in the afternoon would be six-tenths of a second quicker than he had managed during the morning and meant he ended the day little over a second off the pace – and ahead of a number of former race winners.

The official BTCC website caught up with Hill following the completion of testing yesterday.

“Today was really good,” said the Kent-born driver. “We had a really strong result this morning; we tried lots of things in the car, running through lots of different scenarios, and we definitely found one that worked.

“The afternoon was more of the same, we ended up second just behind Tom [Ingram], so the feeling is really good. It was the first time the whole team has been together so it was nice to get everyone doing their job roles and working as a team.

“I’ve done the circuit in road cars but this is the first time in a touring car around here and it was good. I really like the little circuit it’s nice. It gives something different compared to the national circuit. It’s a mega little circuit, I love it and the car is definitely dialled in.

“Straight away I settled in and felt very comfortable in the Honda, it’s definitely as good as people say it is and it’s nice to be getting behind the wheel of one for once rather than watching them disappear into the distance. It’s definitely made me feel very confident about the year, hopefully we can get this championship underway and we can get fighting for wins.”