RORY BUTCHER: I CAN’T WAIT TO GET MY HANDS BACK ON THAT FORD FOCUS 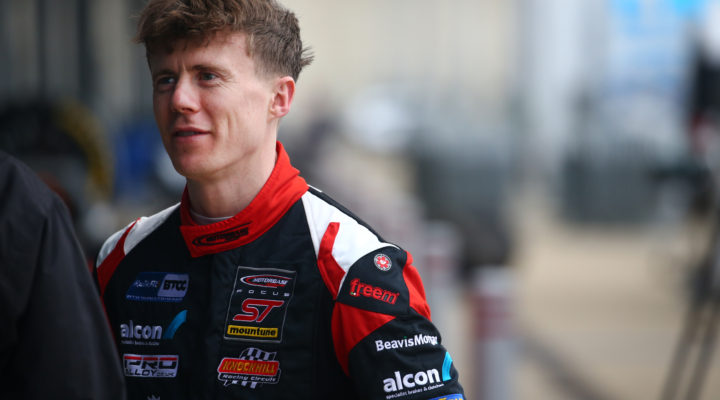 Butcher has notched up 71 BTCC race starts so far and the Scot has an impressive motorsport CV, having competed in numerous championships both prior to and during his BTCC career, including the British GT Championship and European Le Mans Series.

Having been exposed to motorsport through his family from a young age, it seemed inevitable that Butcher would try his hand at it, although his journey to Britain’s premier motorsport series wasn’t without its challenges.

“I finally got the opportunity to race karts when I was eight, but the frustrating thing was, I wasn’t particularly good and by the end of my first year I’d crashed so much and bent so many chassis’ that my dad canned the whole project,” he said.

During his break from four-wheeled racing, Butcher dabbled with bike racing, before buying his first race car aged 17 and returning to competitive racing.

“That’s where my hobby stepped up into a motorsport career.”

While he continued to move through the ranks, Butcher recalls how he idolised the British Touring Car Championship, particularly when his brother-in-law, Gordon Shedden, moved into the series.

“When I first started car racing, I really looked up to the BTCC,” he continued. “But as my career moved and I moved through the ranks, even though I was in the TOCA paddock, my mindset had changed towards sports cars and rear wheel drive, and that’s where my path went for four or five years. If I’m honest the opportunity to compete in the BTCC in 2017 came as a big surprise. But when I actually took part in my first ever race with the series, I was completely hooked – my head was turned!”

Joining the championship at Knockhill in August 2017, Butcher consistently achieved points-scoring finishes, before his first win at Brands Hatch would kick off his most successful campaign, in 2019, where he not only achieved three race wins and podium finishes, but also took the Independent Drivers’ title, Jack Sears Trophy and, alongside teammates Sam Tordoff and Mike Bushell, steered Cobra Sport AmD AutoAid/RCIB Insurance to the top of the Independent Teams’ Championship.

The 33-year-old hopes to build on the success of his 2019 season, as he moves to Kent-based squad Motorbase performance, with new team-mates and a new car for 2020.

“We have this really exciting project with the brand-new Ford Focus ST. It is definitely an unknown quantity at the moment, but from the very little running we’ve had, it’s showing really positive signs and I’m really excited to learn more about the car.

“I think if we can just get the first few rounds out of the way I don’t see any reason why we can’t be competing for trophies come the second half of the year, and be in with a shout of the drivers’ title at the final round – my long-term goal is to fully establish myself in the championship for the long term.”

His process during lockdown to ensure he’s physically and mentally prepared for the first event at Donington Park (1/2 August) has included an increased fitness routine, alongside the use of home simulator training. As well as this, the Scot has been spending time with his family and undertaking some home improvements, which has resulted in the discovery of a new skill, having fitted new flooring in his kitchen!

Following the reopening of circuits for testing, the team has been working to ensure the period in the run-up to the series’ return is used most effectively, with Butcher explaining; “we’re almost doing a second pre-season testing programme, which will take us up to mid-July.

“I think having just built a brand new car, we need every bit of track time we can get and hopefully we’ll be out almost every week between now and the start of the year, so I can’t wait to get my hands back on that Ford Focus.”