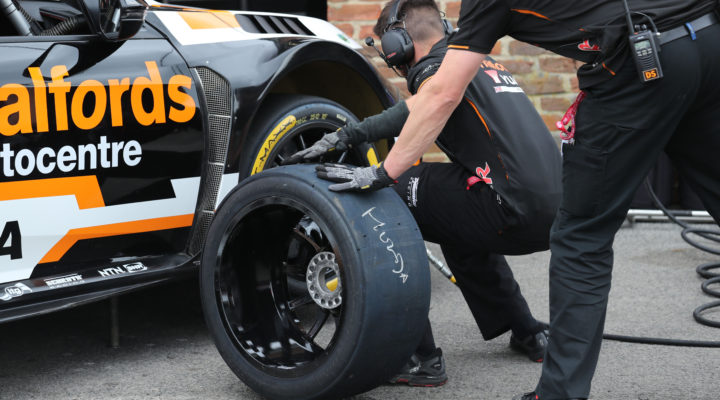 Unsurprisingly, one area fans are keen to learn about is the role of Technicians and Mechanics. In keeping with our BTCC Careers feature, Team Dynamics’ Craig Smith talked us through the various responsibilities of his role as number one Technician on Matt Neal’s #25 Honda in the Kwik Fit British Touring Car Championship.

How did you get the position?

I started in motorsport in March 2004 – which seems an awfully long time ago now. I was set a task, whilst doing my A-Levels, to find a ‘Dream Job Advert’ and theoretically apply for it. The only thing I did differently was to actually apply for it. I had to leave college in order to start the job, which was Junior Race Mechanic, and from there I have worked my way up the ladder.

What are your main responsibilities, both on event and pre/post event?

I have overall responsibility for Matt Neal’s race car, ensuring that the car is always finished to a safe, fast and presentable manner, with the set up as requested by the engineer. On event, we have three technicians (including myself), along with an Engineer, Data Engineer, Bodywork Technician, Tyre Person and Fabrication Specialist. I have to guarantee that all operations on the car happen in the most efficient way to ensure the car is ready for the next session.

Away from the circuit, we have one less mechanic, but all the rest of the staff remain and it is much the same with all works and preparations being done under my control.

What drew you to this field?

What have you found to be more valuable in your career, your education or experience?

Real world hands on experience has been invaluable, I didn’t go down the motorsport college route as when I started college that was nowhere near as accessible as it is now. I’ve been very fortunate to have been in this job full time since 2004! However, education is also important as it provides the foundations that you build on with on the job experience.

What skills have you found vital to do your job?

Communication; being able to communicate to your team-mates, sometimes even non-verbally, in a loud, high pressure situation such as a car coming into the pits, is essential. You all need to be able to come to a decision very quickly on who is doing what, especially when things don’t go to plan!

Do you have a favourite moment of your career in the BTCC? Can you tell us it?

I have several favourite moments and stories – some of which are best not put on the internet! My stand out moment as a number one was probably Matt’s win at Snetterton for the Diamond Double race in 2018.

What advice do you have for someone new to the industry?

Follow your gut, if something doesn’t sit right with you, rectify it immediately! There have been times where I have gone back over work I’ve done and changed the most stupid little thing, however doing so has saved failures and other small problems from occurring.

What advice do you have for someone who aspires to work in a similar position to yourself?

Don’t be afraid to start at club racing level, you will be better off for it in the long run! Get yourself out on track, the appreciation of knowing what these machines are capable of goes a long way. If you can appreciate the G Force when a BTCC driver stands on the brakes then you will think twice about how you build certain parts of said car!