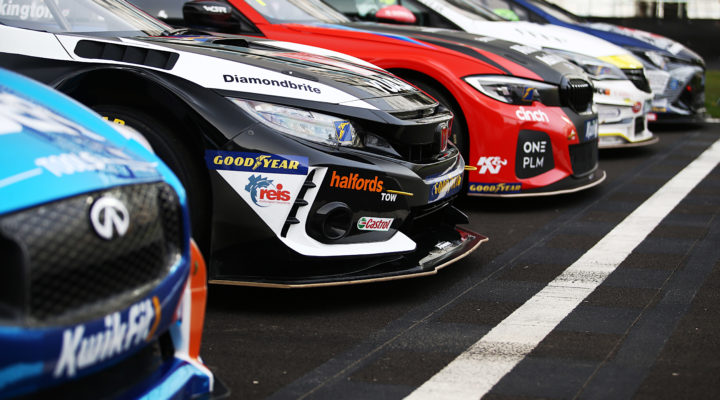 The Kwik Fit British Touring Car Championship will hit the track for a two-day Goodyear tyre test at Snetterton next week (7/8 July) before competition commences at Donington Park next month (1/2 August).

It has been more than 100 days since the official Season Launch took place at Silverstone back in March, with proceedings then promptly halted following the global outbreak of COVID-19.

With elite sport subsequently suspended over recent months, Series Organiser TOCA has been busy preparing for a safe return to action – putting together a rescheduled 27-race championship, which will take place across nine of the UK’s best circuit layouts.

Following the Donington Park opener, Brands Hatch will then host the first of its two race weekends with Oulton Park, Knockhill, Thruxton, Silverstone, Croft and Snetterton all being visited along the way before the belated conclusion of the campaign in November.

First up, however, it’s all eyes on Snetterton and the Goodyear tyre test next week, which will undoubtedly provide some interesting pointers for the form guide before the serious business gets underway just a few short weeks later.

Four-time Champion Colin Turkington will top the near 30-car bill in Norfolk, as the Team BMW racer leads a star-studded line-up of drivers including Matt Neal, Jason Plato, Dan Cammish and Tom Ingram – the latter having topped the only other official pre-season test at Silverstone.

Among the usual suspects taking to the track there will be a number of eye-catching side stories too, including the debut of the all-new BTCC Hybrid Toyota Corolla, which will be piloted by Le Mans class winner and multiple BTCC race winner Darren Turner

Female racer Esmee Hawkey also joins the fray for the first time in the BTCC as MB Motorsport confirmed its Development Driver would be behind the wheel for one of the two days of testing around the 3-mile circuit.

In total, all 15 BTCC teams are expected on-track with BMW, Honda, Toyota, Vauxhall, Ford, Mercedes, Audi, VW, Hyundai and Infiniti all being represented.

With the nation still carefully emerging from recent lockdown measures, fans and independent media are unable to attend the test next week as circuit owner MSV continues to work towards the re-opening of its venues to spectators for race events later this month.

The BTCC’s official media staff and photographer will be on hand at Snetterton, however, as will TSL Timing – providing live timing of the two full days of action. Keep up to date with all the news and information via www.btcc.net and the official BTCC social media channels.