BTC RACING CLOCKS UP THE MILES AT GOODYEAR TYRE TEST 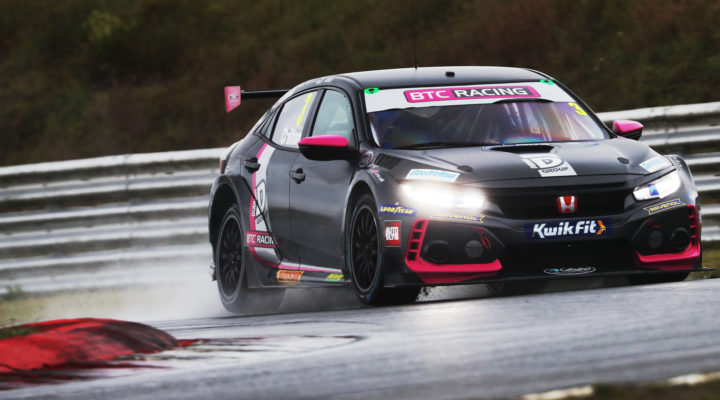 Sharing the track with many of this year’s BTCC contenders, the BTC Racing trio of Tom Chilton, Josh Cook, and Michael Crees stated their intent on the 2020 title push early on, with all three drivers setting times in the top-12 over the two-day test.

Changeable weather conditions kept the squad busily working through their respective set-up plans, as they took to the track for the first time since the championship’s official Season Launch at Silverstone in mid-March.

Chilton was quick out of the box, setting the second-fastest time in the #3 Honda Civic Type R during both morning and afternoon practice sessions on the opening day, and claiming second-fastest place overall.

Cook’s consistent running saw him set an early pace on Wednesday morning. Initially topping the timing screens as he focused on wet-set-up changes, the #66 FK8 completed 84-laps across the two days.

Latest-signing Crees welcomed the chance to gain more mileage in his new charge for the 2020 season, surprising many with a solid top-eight lap-time on day one. After initially struggling to find his feet in the wet on day two, a late change to the #777 Civic paid dividends, and the 36-year-old posted the second-fastest lap time as the final session came to a close.

The team’s focus now turns to Donington Park for the long-awaited opening rounds of the Kwik Fit British Touring Car Championship on August 1/2.

“It’s been a great two days for the team,” said Joint Team Principal Bert Taylor. “We’ve come away positive for the season ahead. All three drivers have done a fantastic job on track. Tom has shown his pace early on and settled into the team well alongside Josh, working on the car set-ups and data. Michael has had a great start, setting the eighth-fastest time in the dry and third-fastest in the wet.

“The team has worked hard in tricky conditions, and the data gathered will be of great benefit to our campaign once the season gets underway.”

“It’s been a really positive couple of the days for the team,” said Chilton. “We’ve learned a huge amount about the cars. I’ve come away from Snetterton with a good understanding of how the Fk8 behaves in the wet and dry – that’s going to be a great benefit going into the start of the season.

“The dynamic between the three drivers worked well, and we all now know where we need to be. It was also a good opportunity to get to know my new engineer before we start racing.”

“We’ve swept through a load of different settings over the two days,” said Cook. “We concentrated on learning as much as we could about the car and didn’t focus too much on the lap times. The wet weather meant we managed to get a lot of wet running in, which has given us a good amount of data to take forward.

“I expected to be a little rusty after such a long break, but from the first lap out of the box, I felt more comfortable in the car than I ever have before. I’m confident that we’ll be competitive coming into Donington Park.”

“The boys have worked so hard over these two days, so to come away eighth and third fastest at the end of the two days is a brilliant way to repay them,” said Crees. “I’m buzzing now; it was a great result for me.

“I hit the ground running in the dry on day one, but it was tough running in the wet and it took a while to find the right set-up. Every time I’ve got back in the car, I’ve gone quicker. I couldn’t ask for more than that. I can’t wait to get started now.”