ASH SUTTON: ‘IT’S FAIR TO SAY THAT WE HAVE GOT TO GRIPS WITH THE CAR IN THE WET’ 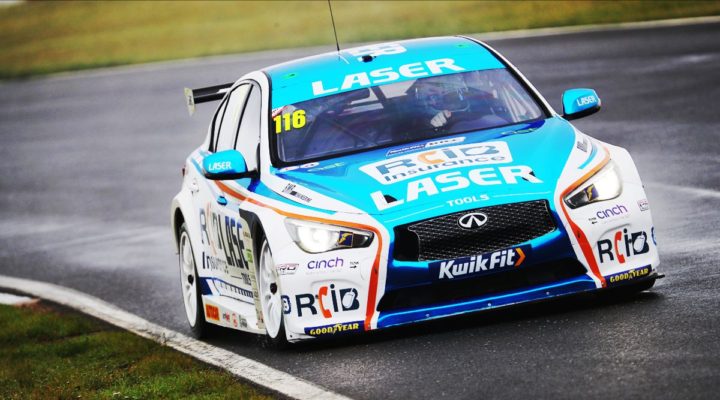 Following a four-month track hiatus due to the coronavirus lockdown, the Infiniti Q50 driver joined the rest of the 2020 grid at the Norfolk venue to clock some much-welcomed mileage ahead of next month’s rescheduled season-opener at Donington Park (1/2 August).

Working through a structured programme alongside team-mate Aiden Moffat, the 2017 champion set the seventh fastest time on the opening morning before wet weather hit the circuit.

With the conditions failing to improve during Tuesday afternoon, the Independent team worked on fine-tuning set-up and Sutton emerged as the driver to beat on the second day of running – topping the timesheets in both sessions in the unrelenting tricky conditions.

Recording a total of 74 laps over the course of both days and buoyed by the progress made, Sutton’s attention now switches to the opening three races of the 2020 Kwik Fit British Touring Car Championship at Donington Park next month.

From there, the 26-year-old will embark on a busy few months as the battle for Britain’s premier race series tours the country, culminating around the Indy layout of Brands Hatch on 7/8 November.

“Due to the COVID-19 pandemic, it has been quite a long lay-off out of the car,” said Sutton. “It obviously felt great to be back behind the wheel and it felt like no time had passed; I was straight back into the groove of things.

“Whilst it was great to come away with the fastest time in the wet conditions, you can’t read too much into it as you don’t know what everyone else up and down the pit-lane is working on. That being said, we’re very happy with how things have gone for us as a team.

“We went into the test with a clear plan of what we wanted to work on and it is pleasing to come from Snetterton knowing that we have been able to make some real improvements to the Infiniti.

“We went into the test with a clear plan of what we wanted to work on but unfortunately due to the weather conditions we had to push that aside. We were really looking forward to getting some dry running as our time in the car has been very limited. It’s fair to say that we have got to grips with the car in the wet.

“It is going to be a busy few months once racing gets underway at Donington Park but I’m more than up for the challenge and I’m excited to see what we can achieve; I have the best possible team around me and I’m confident we will be firmly in the mix towards the front.”