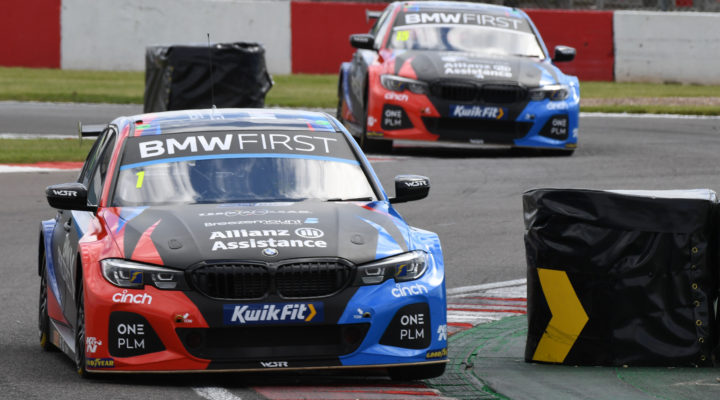 The Team BMW pairing of Colin Turkington and Tom Oliphant topped the timesheets in BTCC FP2 at Donington Park, with the former leading the way in both practice sessions around the 1.98-mile National Circuit.

Reigning champion Turkington is wasting little time in firing out a warning to any hopeful challengers to his throne as he once again dipped well into the 1:09s lap time bracket.

Oliphant also impressed – as well as highlighting the overall qualities of the West Surrey Racing-run BMW 330i M Sports – as he circled the Derbyshire track just 0.244s shy of his illustrious team-mate.

Toyota Gazoo Racing UK with Ginsters’ Tom Ingram was once again on the pace in third, as was the hugely talented Ash Sutton in fourth. Sutton has moved from Subaru machinery to the Laser Tools Racing Infiniti during the off-season and the 2017 champion already seems extremely comfortable in his new surroundings.

Rory Butcher showed the speed and potential of the new Motorbase Performance Ford Focus as the Scotsman set the fifth fastest time, ahead of the beautiful looking Hyundai i30N of Chris Smiley – also a brand new car on the grid for 2020, thanks to Excelr8 Motorsport.

Bobby Thompson enjoyed a promising session as he rounded out the top ten in the GKR TradePriceCars.com Audi S3.

Jack Goff endured the first notable accident of the new BTCC season as his Team HARD-run Volkswagen CC went off at high speed at McLeans, bringing about a brief red flag spell. Goff’s car sustained fairly significant damage on the left side and the Kent-based team are now working on repairs ahead of qualifying.

Qualifying for Round 1 of the 2020 Kwik Fit British Touring Car Championship from Donington Park will take place at 15:20 with all the action being screened live and exclusively via www.itv.com/btcc.